Denul
D'riss
Tennes
Caladan Brood was a warlord, often called simply the Warlord,[1] who opposed the Malazan armies in the North Campaign on Genabackis.[2] He was a giant man, all muscle and bone, and was said to be human with Barghast blood.[3] Said to be an Ascendant,[4] power rolled from him in musky waves. His eyebrows were hairless and his teeth were filed.[5] He had a wide, flat face with strangely bestial eyes.[6][7]

Brood was a longtime friend and companion to Anomander Rake. Over thousands of years the pair had clashed but always been drawn back together, an alliance never broken. Korlat suspected the friendship was strengthened by the long periods the two spent apart over the ages.[8]

Many thousands of years ago, Brood, Rake, and the Queen of Dreams had walked the land together until Brood chose a more solitary path.[9] When he returned about 1200 years before the Malazan Book of the Fallen, he carried Burn's Hammer,[9] an enormous weapon of iron[10] with a copper-wrapped handle.[11] It was said to be capable of shattering mountains, with the Great Raven, Crone, presenting the broken peaks east of the Laederon Plateau as evidence of Brood's "younger, more precipitous days".[12]

His primary Warren was Tennes,[13] but he also had access to D'riss[citation needed] and High Denul.[14]

During the Malazan Empire's attempts to conquer Genabackis, Caladan Brood led a unified force of Tiste Andii, Crimson Guard, Rhivi, Mott Irregulars, Ilgres Barghast, and soldiers from the remaining Free Cities against them. Under his command, his forces managed to delay the Malaz 5th Army from completely conquering the north of the continent at Blackdog Forest for a period of at least four years.[15] His second in command was the once High King Kallor.[16]

After the allied city of Pale fell to the Malazan siege, Brood left the Crimson Guard behind to hold the north while the rest of his troops moved south to respond. High Fist Dujek Onearm was ultimately forced to parley with Brood and Kallor outside Pale in order to extricate his forces.[17]

In conversation with Baruk, Anomander Rake recalled the last time Icarium had visited him some 800 years before the Siege of Pale. The Jhag had been in the company of Mappo Runt and Osric, and Brood had worked hard to keep the arguing Rake and Osric apart.[18]

Caladan Brood allied himself and his Host of over thirty thousand soldiers[19] with his former enemies, Dujek's now renegade Malazan army, in order to combat a more powerful and revolting foe, the Pannion Domin. His second in command during the Pannion War remained the once High King, Kallor.[20] A number of Anomander Rake's Tiste Andii sorcerers were attached to his forces, but Rake and Moon's Spawn were Brood's Shaved Knuckle in the Hole.[21] The Crimson Guard withdrew from the Host to attend to internal matters.[22]

The Host was also joined by Silverfox and the Mhybe, which caused friction between Brood and Kallor. The High King called Silverfox an abomination, recognising the soul of his enemy the Sister of Cold Nights within her, and demanded she be killed.[23] But Brood kept the girl under his protection.[24]

Ganoes Paran, now Master of the Deck, observed a vision of Burn within Finnest House. There he discovered that Burn slept in response to the infection of her flesh by the Crippled God. In order to break the chains poisoning her body, she made of herself a weapon, putting all of her spirit and power into the forging of a hammer. She then gave the hammer to Brood. But to use the hammer meant to free the Fallen One from his chains and destroy all life in the world. The knowledge that Brood refused to use the hammer left Paran weeping.[25]

Brood's goal for the war was to liberate the Pannions from the rule of the Pannion Seer.[26] But it soon became clear that a K'Chain Che'Malle Matron and the Crippled God were the hidden powers behind the Pannion leader. Brood became frustated by Kallor's constant insubordination, and by Kruppe's seemingly ludicrous claims to protect them all from the Crippled God. When Kruppe mocked Brood's rising anger, the warlord struck a mighty blow with his hammer at Kruppe's feet. The resulting concussion sent Whiskeyjack and the other witnesses tumbling away while birthing a range of mountains on the Catlin Plain. Kruppe, however, remained untouched and unphased, and calmly brushed the dust off his clothes.[27]

At the Siege of Capustan, Humbrall Taur's White Face Barghast drove the Pannion forces out of the city onto the plains to the west. There Brood and Dujek's armies crushed the Seer's military, captured Anaster and the Tenescowri, and killed Septarch Kulpath.[28] Brood organised a parley of the victors and representatives from the city to decide on the alliance's next steps. The Mask Council priestess, Rath'Burn, charged the warlord with neglecting his duty to Burn. She demanded he turn over the hammer with which he should have broken Burn's chains. Brood dropped the hammer in her arms shattering her wrists. Then he took pity on her, healing her wounds with his magic.[29]

Brood admitted feeling burdened by carrying the hammer.[30] He had long considered himself a coward for failing to choose between the options to destroy the world or destroy civilisation. But ultimately he came to feel that Burn had faith that he would find a third option.[31]

The allies marched on the Seer and his forces at Coral. First, they split their forces to liberate Setta and Lest intending to reunite at Maurik. By this time, Brood was aware that Dujek had deceived him when claiming to have gone renegade.[32] He was also irritated when only Whiskeyjack and a token force of Malazans arrived at Maurik while Dujek and the rest secretly advanced on Coral. The warlord took Kallor's advice and made little effort to rush to Dujek's assistance at the Battle of Black Coral in order to keep his own troops fresh.[33] Brood was unaware that Dujek planned to sacrifice himself and his army to buy the warlord more time to find a third option.[34]

In the end, Kallor betrayed the alliance, killing Whiskeyjack and severely wounding Korlat before joining the Crippled God. Orfantal brought Brood to the battlefield by Warren so that the warlord could heal his sister.[35][36] Thinking Rake and Moon's Spawn destroyed and faced with an overwhelming number of the Seer's undead K'ell Hunters, Brood felt no choice but to draw his hammer.[37] But he froze with his hammer held high as the newly freed god, Togg, howled and summoned thousands of T'lan Ay to their defence followed by the arrival of Rake and his Skykeep.[38]

After the battle was won, Brood was content to leave negotiations for possession of Coral to Rake and the Malazans. In his eyes, the Empire had earned all they might ask for.[39]

L'oric sought a guardian for Kurald Thyrllan during the absence of his father, Osserc. He considered contacting one of his father's former companions, a list which included Caladan Brood. But L'oric rejected the idea, saying Brood "carries his own burdens, these days."[40]

Brood was revealed to be one of the particpants in the last Chaining of the Crippled God.[41]

After the Pannion War, Dujek's forces were recalled to Seven Cities to put down the Whirlwind rebellion and Brood's alliance broke up. The Rhivi and Barghast returned to their lands while the Tiste Andii settled in Black Coral. Meanwhile, the Crimson Guard, who had remained in the north, vanished to parts unknown.[42] Caladan Brood's immediate movements were not revealed.

After Anomander Rake's death, Caladan Brood carried his body to a barrow outside Darujhistan prepared by Burn and sealed it with a Barghast glyph that meant Grief. He then took the sword Dragnipur and shattered it with his hammer.

Caladan Brood settled just outside the city of Darujhistan adjudicating matters brought to him by emissaries from the north, the Free Cities and the Rhivi Plains. As time went by, he felt a certain tension and feared that there had been a shift in the balance of power with his friend's death.[43] His fears proved true with the rise of the Legate. Brood was directly confronted by the Legate (actually the latest interation of the Tyrant Kings) when his erstwhile friend, now a puppet of the Tyrant, Barukanal, came to visit him. The two reached an impasse however, when Caladan threatened to pull down the city to stop the Tyrant if he had to.[44]

Being a respected figure for the Rhivi, he did his best to try and dissuade the Rhivi tribes and their leader Jiwan, from going to war with the Malazan armies on Genabackis.[45] He did not succeed as the Rhivi did engage a Malazan force, confident that they could finally rid themselves of the Malazan menace that had been troubling them.[46]

In Forge of Darkness[]

Brood was a renowned Azathanai High Mason. He was hired by Anomander Purake to build and dedicate a hearthstone in the new home of the betrothed Andarist and Enesdia to celebrate their marriage. The stone was inscribed with an Azathanai blessing that would only be known by the new husband and wife. At the time of the stone's placing, Brood demanded an oath from Anomander which prompted Rake to demand one in return.[48] This created a bond between them and ultimately led to their longstanding companionship.

Returning to his home in the west, he met fellow Azathanai, Grizzin Farl, and they shared several jugs of Tiste wine that Brood said he had been saving for Kilmandaros, Farl's wife.[49]

After the Purake wedding day tragedy, Brood returned to Andarist's home where he told Anomander he would show him how to end the brewing civil war among the Tiste.[50]

In Fall of Light[]

"They are a generation that has tasted blood, and when horror fades, nostalgia seeps in. In war all is simple, and there is appeal in this. Who among us is comforted by confusion, uncertainty?"
―Caladan Brood[src]

Grizzin Farl: "Is it as the Jaghut assert then? In society we find the seeds of its own destruction?"
Caladan Brood: "Perhaps, but they miss the point. It is the absence of society that leads to destruction. When concord is lost, when arguments cease, and in opposition neither side sees the other as kin, as brother and sister, then all manner of atrocity is possible."
―Grizzin Farl and Caladan Brood, sitting at campfire, finishing third bottle of wine[src]

"...I build with my hands. I am a maker of monuments to lost causes. If you travel west of here, you will find my works. They adorn ruins and other forgotten places. They stand, as eternal as I could make them, to reveal the virtues to which every age aspires. They are lost now but will be rediscovered. In the days of a wounded, dying people, these monuments are raised again. And again. Not to worship, not to idolize – only the cynics find pleasure in that, to justify the suicide of their own faith. No, they raise them in hope. They raise them to plead for sanity. They raise them to fight against futility."
―High Mason Caladan Brood[src] 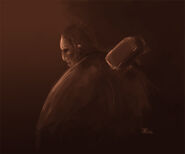 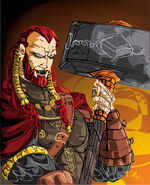