Clip of the Exiled

Clip was a nineteen-year-old Bluerose Tiste Andii of the first generation born to the Exile. Like others of his peer group, he had rejected the traditions of the Onyx Order including casting away his clan name, naming himself Clip of the Exiled instead.[1] His people worshipped Anomander Rake as the Black-Winged Lord.[1]

He was not a pure blood Tiste but also part Nerek, Letherii, D'rhasilhani, and possibly others. He was tall and thin with straight, midnight-black hair which he kept unbound. His skin tone was dusky, similar to that of the Tiste Edur. His face was unlined with somewhat hooded features and eyes like firerock.[2] He wore a faded black hide shirt and carried a horn and unstrung Bloodwood bow on his back. On his right hip was a quiver of arrows with bloodwood shafts and tear-dropped shaped iron arrowheads whose blades formed an X pattern. A plain rapier encased in a silver-banded turtleshell scabbard hung from his baldric. The scabbard and its fastening rings were bound in sheepskin and the quiver's base was packed with moss to deaden their noise as he moved.[3]

Clip was habitually spinning a thin chain in his hands. On either end of the chain was a plain finger-ring--one gold and one silver--which he kept constantly whirring and snapping. If not for the noise of the chain, his passage was virtually soundless. When not in use, he kept the chain in a pouch lining the inside of his shirt.[4]

Despite the isolationist nature of most of the Tiste Andii in Bluerose, Clip, according to his own words, often visited the city, seeking earthly pleasure. He boasted that only the gods knew how many bastards he had sired.[5]

Although rejecting the old traditions, Clip could not ignore a direct order from the Reve Master of the Rock of the Onyx Order. At Ordant Brid's behest, Clip sought out Silchas Ruin, Fear Sengar, Seren Pedac, Udinaas, Kettle, and Wither in their flight through the Bluerose Mountains. He was not impressed by Ruin, the brother of his god, and constantly taunted him with barely veiled insults. Seren Pedac thought him appallingly relaxed in Ruin's presence and the Soletaken have cut the youth's throat with his sword for one insult too many but for Clip's nonchalant dodge. Clip brought the group back to Andara through Kurald Galain excited at the disorder they were sure to bring to his home.[6]

The gathered Onyx Wizards offered Ruin help in searching out the Finnest of Scabandari Bloodeye by offering Clip as his guide. Ruin was surprised to learn Clip was the Mortal Sword of the Black-Winged Lord, but after consideration doubted his brother would be displeased with the choice.[7] Seren Pedac felt out of place after Clip eclipsed her role and led them further north into the mountains.[8] When they were alone, Clip admitted to her that he had been chosen to be Mortal Sword because he was blessed by Mother Dark--the first Andii in tens of thousands of years able to walk the Darkness.[9]

During their journey, Clip mostly kept close to Silchas, only interacting with other members of the group to mock them or laugh at them. He appeared careless and very self-confident. At one point, Clip stopped the spinning of his chain and looked to the south. When Fear asked what their guide was doing, Silchas Ruin said Clip was in mourning for all who dwelt in Andara. The Tiste Andii there had been slain by the soldiers of Factor Letur Anict and Orbyn Truthfinder, who were hunting for their group. Ruin expected Clip wondered if he had made the right choice to join them. If he had not left Andara then it would have been the Letherii intruders who had perished. Clip admitted only that such thoughts were fleeting. Then Ruin said it was time, and Clip spun his chain to open a portal into Kurald Galain.[10]

Clip led them through a desolate Kurald Galain that was lit with an illusion of light for those in the party who could not see in the dark.[11] Eventually they passed through a massive gate into the lifeless world of Starvald Demelain where they passed the bodies of hundreds of dead dragons to reach another gate.[12][13] Both Clip and Ruin noted the corpse of a Bentract Bonecaster lying near the foot of the gate.[14]

The group passed through the portal to the Refugium and found a room full of gates guarded by Trull Sengar and Onrack T'emlava. When Fear saw Ruin move to attack his brother, he attempted to stab the Andii in the back. But Clip drew his chain like a garrote around Fear's neck, cutting it to the spine. Then he moved on to Udinaas, who was guarding Kettle. Before Clip could pull Kettle from the slave's arms, Seren Pedac struck him with a punch of focused Mockra. Clip threw a dagger into her shoulder, then advanced on her grinning with a knife and rapier as her continued attacks made his eyes and mouth bleed. Trull knocked Ruin to the ground before intercepting Clip. The Mortal Sword underestimated the badly wounded Trull's abilities and was shocked when the Edur overpowered him with a flurry of blows that broke his right forearm, right shoulder, and left femur. A final blow to the temple knocked him senseless. When Udinaas later looked for his body, he found only a bloody trail leading to one of the gates.[15]

Clip later appeared before Nimander Golit on Second Maiden Fort claiming to be the Herald of High House Dark. He told Nimander he had come to bring all the refugees of Drift Avalii to Anomander Rake. When Nimander argued that Rake did not want them, Clip claimed it only mattered what Mother Dark wanted. After Nimander left to gather his kin, Clip's thoughts revealed most of what he told the young Andii was a lie. He thought Rake would soon learn that a god could not betray his followers and walk away without consequences. Soon they would find him and show him how it felt.[16]

While escorting Nimander Golit and his group to Black Coral, Clip overconfidently challenged the Dying God and was possessed by him, unbeknownst to his followers.

Clip repeated his claim to have been the Herald in High House Dark as well as claiming to have been the Mortal Sword of Anomander Rake in a conversation with Kedeviss. When she doubted him and voiced the thought that he was still possessed by the Dying God, he unmercifully killed her.[17]

At the conclusion of Toll the Hounds, the actions of Mother Dark and the Redeemer vanquished the Dying God and returned Clip to himself.

Nimander mentioned that there was a single prisoner in his cells, who had willingly put himself there, with the door being locked from inside, refusing to leave his self-made exile. 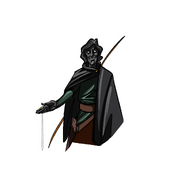