Fist
Coltaine was the leader of the Wickan Crow clan. Around forty years of age,[1] he was described as having a lean, expressionless lined face with deep brackets around a thin, wide mouth, and squint tracks at the corners of his dark, deep-set eyes. He wore his hair in oiled braids which hung down past his shoulders, knotted with crow-feather fetishes. He was tall, wearing a battered vest of chain over a hide shirt, a crow-feather cloak hanging from his broad shoulders down to the backs of his knees.

He wore a rider's leggings, laced with gut up the outer sides to his hips. A single horn-handled long-knife jutted out from under his left arm.[2][3] He carried a black feathered round shield on his left arm. [4]

Coltaine was known to isolate himself from his people with a stoicism beyond the Wickan norm.[6] But they followed his orders without question. He was a supremely talented commander and possessed an uncanny knowledge beyond understanding. The Wickans followed him in awe.[7]

He half-jokingly referred to his second-in-command Bult as his uncle, although the veracity of this claim was left unclear.[8]

Later, as leader of the Chain of Dogs, he became a curse upon the lips of the warriors of the Apocalypse whilst others worshipped him.

Like others of the old Emperor's commanders, Coltaine had been side-lined by Laseen. A change in the political situation however led to him being recalled from the backwaters of Quon Tali to take command of the 7th Army on Seven Cities.[9] His presence was initially unwelcomed by his own officers as many had fought against him on the Wickan frontier.[10]

Coltaine's arrival at Hissar was observed by Mallick Rel, chief advisor to High Fist Pormqual, the historian Duiker, and an unnamed captain of the 7th. The Wickans looked to be on the verge of causing a riot when, at a bellowed command by Coltaine, order was restored within less than a minute.[11] The Fist earned Mallick's enmity by allowing Bult to deliberately insult and dismiss him from the 7th's command council.[12]

The Fist immediately began training the Malaz 7th Army in guerrilla tactics with his Wickan warriors. When the Whirlwind began its rebellion, this training proved prescient, allowing the army to escort and protect the tens of thousands of refugees accompanying them to Aren. Along the way, he successfully led the vastly outnumbered army in battle against the various tribes and city legions who sought to kill them.

When the Fist struck and bloodied the near-Ascendant Gesler's nose at Vathar Crossing, his warlocks Nil and Nether gasped in recognition that Coltaine himself appeared to be on the path to Ascendency.[13]

Before the Battle of Sanimon, the exhausted Chain of Dogs received a fortuitous gift from renegade Malazan Fist Dujek Onearm. Aided by financing from the T'orrud Cabal in Darujhistan, the Fist contracted the Trygalle Trade Guild to travel through the Warrens to deliver three massive carriages full of provisions. Additionally, Coltaine was presented with an ensorcelled bottle of smoky glass on a chain which he was instructed to wear at all times because "the Empress must not lose you". The bottle was created by Quick Ben and was intended to capture Coltaine's soul in case of his death. Coltaine dismissed the gift, passing it on to Duiker instead.[14]

Coltaine succeeded in bringing the majority of refugees to safety within the walls of Aren. But he and his soldiers were forced to make a final doomed stand outside the city's gates. High Fist Pormqual, with Mallick Rel at his side, refused to authorize a sortie to aid the Wickan Fist. When the last of Coltaine's soldiers fell, enemy commander Korbolo Dom had the Fist crucified as ten thousand Malazan soldiers watched and were broken by their own helplessness. Dom's High Mage Kamist Reloe then used his powers to prevent an uncountable number of crows from retrieving the Fist's soul for reincarnation.

Aren Guard commander Blistig called for his best archer, Squint. With uncanny aim, the man fired an arrow from the wall into Coltaine's head, killing him. The crows then descended upon the dead Fist, covering his body, and when they flew off again he was gone. The Chain of Dogs was at an end.[15]

Later, a pregnant woman in Wickan lands learned her child was an empty vessel, and she readied to abort it. But before she could act, she was engulfed in a cloud of crows and felt the child stir.[16]

The High Alchemist Baruk of Darujhistan sent a bhokaral servant to Quick Ben while the Seven Cities rebellion was ongoing offering his assistance and alliance. Among the string of words the inarticulate beast shouted was "Coltaine!"[17]

Many weeks later, Duiker shared the story of the Chain of Dogs and Fist Coltaine of the Crow Clan with the surviving Bridgeburners at the opening of K'rul's Bar.[18]

After Coltaine's fall, the Aren markets thrived with the sale of relics from the Chain of Dogs. Among them were said to be pieces of Coltaine's withered flesh.[19] The hill where he and his men had perished came to be known as the Fall and was a place of pilgrimage. Decorated with fetishes, the site was visited unseen at night by pilgrims who included Coltaine's enemies, the Kherahn Dhobri, Bhilard, and Semk, as well as the Khundryl.[20]

Coltaine was described as cold iron by Mathok, who also stated that the Fist had fought and defeated the hot iron Korbolo Dom in eight of nine major engagements. The only battle he lost had been the last.[21]

Empress Laseen sent Adjunct Tavore Paran to Aren with the Malaz 14th Army to seek vengeance for the destruction of Coltaine's army and put down the rebellion. Several of the survivors of the Chain of Dogs joined her, and Temul told Fiddler that Coltaine had been reborn to a woman of the tribe whose child had once been empty before the crows came.[22]

After the Battle of Raraku, Tavore promoted Temul to the rank of Fist in the 14th Army.[23] He matured into his command and Fist Keneb thought him more and more like Coltaine every day.[24] Temul rejected any comparisons, seeing only shame in Coltaine's decision to send him away with Duiker. He often argued with Warleader Gall, who also saw much of Coltaine in him.[25] Temul predicted that most of the Wickans would leave the army once they returned to Unta, shamed to have seen the end of the Whirlwind rebellion without following Coltaine into death and glory.[26]

Adjunct Tavore's transport fleet was redirected to Malaz City by order of Empress Laseen so that she and the Empress could meet in Mock's Hold. The Adjunct soon discovered that the Empress had reached a political settlement with Mallick Rel and Korbolo Dom that would raise both men to power while condemning the Wickans and Khundryl Burned Tears as scapegoats for the Empire's failures in Seven Cities. Coltaine himself was recast as a traitor who had conspired with the enemy to slaughter Pormqual and the garrison at Aren. Tavore refused to deliver her loyal troops up to slaughter and instead took the entire army renegade. She relieved Temul, Nil, Nether, and the other Wickans from duty so that they could return to their homeland and defend it from the planned Malazan pogrom.[27][28]

Shadowthrone lamented the ill treatment of his loyal Wickans with Tayschrenn. But the High Mage argued that the Wickans were not as vulnerable as he feared and predicted that decades from now, an aging Temul would mentor a young warrior named Coltaine.[29]

Fourteen leagues west of the Draconean Isles, off the western coast of the continent of Lether, Shurq Elalle's pirate vessel, the Undying Gratitude, encountered a single battered Tiste Edur vessel in becalmed waters. Thinking it had been destroyed by a bad storm and abandoned, they boarded in search of loot. On board they found signs of a battle and the single corpse of a Merude Elder, whom had been spiked to the floor and tortured with a knife. All of the ship's logs and charts were missing, but its hold was still filled with precious cargo--amphorae decorated with the image of a crucified Coltaine surrounded by hundreds of flying crows (although they did not recognise the Wickan) and filled with blood for sacred Edur rites.[30]

Fist Keneb thought Coltaine one of a handful of military geniuses who knew the fortunes of war could turn on a single, unexpected and outrageous act.[31]

In Return of the Crimson Guard[]

Coltaine's sacrifice was completely misunderstood and ignored in the Malazan homeland. Instead he was known as the "fiend Coltaine", who along with his "traitorous Wickans" had led the Seven Cities rebellion himself.[32][33]

His rebirth was expected by the Wickan elders, and it soon came to pass.[34] During tensions on the Wickan Plains, a group of Crow elders and children sought refuge in the Malazan border fort commanded by Lieutenant Rillish Jal Keth. The fort was soon besieged by angry Malazan settlers determined to exterminate the Crow. Rillish refused to turn over the Wickans, but as the fort fell to the invaders the Wickan elders conducted a bloody ritual to open a magic gateway for the soldiers and children to escape.[35] As the group travelled further into Wickan lands for safety, Rillish noticed a child carried upon a travois, doted on and surrounded by the other children. They were soon joined by the twins Nil and Nether late of the Malaz 7th Army, who kissed the boy and studied him in wonder.[36] Rillish doubted the claims that the child was Coltaine reborn until, moved by the Wickan's plight, he offered to resign his Malazan commission.

"I offer my resignation. Do you, Nil or Nether, as senior officers, accept?"
A roar as the crowd of enraged elders surged inward, raised blades flashed orange in the afternoon light. A clot of dirt struck Rillish's chest. Both twins threw their arms up for silence, shouting down the crowd.
"Yes," sounded a piping voice that cut through the din like a whistle. The elders were silenced instantly, almost as if abashed. The twins stared down, astonished."
"Accepted," said the toddler, grinning up at Rillish.
It occurred to Rillish then that in the view of many, the twins were not the senior officers present.

"Coltaine rattles slow
across the burning land.
The wind howls through the bones
of his hate-ridden command.
Coltaine leads a chain of dogs
ever snapping at his hand.

Coltaine's fist bleeds the joumey home
along rivers of red-soaked sand.
His train howls through his bones
in spiteful reprimand.
Coltaine leads a chain of dogs
ever snapping at his hands."
―'Coltaine', a marching song of the Bonehunters[src] 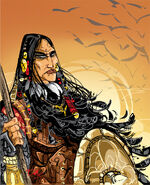 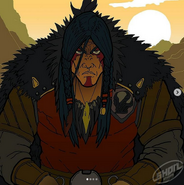 The Fall by Ylva Ljungqvist