Lady Envy was a sorceress, daughter of the Elder God Draconus, and sister to Spite.[2] Her mother was thought to be Sheltatha Lore.[3]

She was described as tall and slim, with long, straight, impossibly clean and perfectly combed black hair, deep red lips, and stunningly beautiful eyes darkened by kohl.[4][5][6] It was remarked by Toc the Younger that she looked around twenty five.[7] She wore a flowing, blindingly white, veiled telaba similar to those worn by highborn women of Seven Cities.[4][6]

Envy possessed great natural charisma,[8] which she enhanced by sorcerous means,[9] and the seeming ability to read minds.[10] Her kiss could enslave people to do her bidding. Even those she chose not to bend to her will by sorcery found it difficult to resist her. However, she seemed to prefer to influence those around her with her feminine charms so they would choose the kiss and thus enslavement willingly, instead of simply forcing them to accept it. She admitted to Toc the Younger that she had a penchant for cruelty, and sympathized with his desire to resist her.[8]

Her vast magical powers were not limited to manipulation. She was able to unleash extremely destructive waves of energy against her enemies, slaying hundreds at a time.[11] Lady Envy was also very adept at healing[12] and could cast someone into an involuntary sleep.[13]

Toc called her a "mistress of adventure, seduced by serendipity", more likely to act in anger while momentarily affronted rather than driven by vengeance in the long term. She "existed for distraction, for wayward whims."[14] Fatalism was unknown to her.[15]

Envy was over two hundred thousand years old and her own memories of her long life were sometimes unclear.[16] It was known that Lady Envy once travelled for a time with Anomander Rake and Osric, though their relationship was more like rivals keeping tabs on each other than friends. Eventually, Osric left the group and some time after that, in the days before the Chaining of the Fallen One, an argument erupted between Lady Envy and Anomander, resulting in each of them choosing their own path. Rake went on to participate in the Chaining, but Envy did not.[17] Envy also claimed to have "crushed a few [empires] in my time".[18]

In Memories of Ice Edit

Envy made her first appearance in the books at Morn where she resided in a ruined Jaghut tower while she studied the the Rent there. She had with her three charmed Seguleh servants: Senu, Thurule, and Mok, as well as two animal companions: Garath, a large dog, and Baaljagg, the world's only living ay. They were soon joined by Toc the Younger, freshly returned from being stranded in the Warren of Chaos, and the T'lan Imass, Onos T'oolan.[19]

In her study of the Rent, she determined that the portal seemed almost mechanical in nature and that a K'Chain Che'Malle Matron had escaped from it decades ago before freeing her brood from the nearby barrows. Tool offered her further insight, but requested she accompany him northward to discover the details.[19] As the group ventured towards the territory of the Pannion Domin, Envy took great delight in Toc's company and enjoyed torturing him with her presence.[20][21]

It was soon revealed to the reader that Envy had gathered her odd assortment of companions at the behest of K'rul as part of his plans to oppose the Crippled God. The Elder God sent Envy to wage war with the Pannion Seer in the south while the coalition of Malazan forces with Anomander Rake and Caladan Brood struck from the north. K'rul hoped Envy's attack would split off some of the Seer's forces so the northern coalition had a greater chance of success. Further, the Elder God revealed to Envy that the Crippled God had poisoned the Warrens which were K'rul's own lifeblood and that he was afraid.[22]

The first of the Pannion forces to fall to Envy's company was a K'ell Hunter followed shortly by Seerdomin Kahlt and his frontier temple.[23] Then Envy unleashed her power at Bastion against First Child Anaster's Tenescowri hordes.[24] All the while she struggled to keep the Seguleh under her control. The coalition fractured at Bastion when Toc the Younger, feeling himself outclassed among monsters and immortals and no longer willing to be manipulated by Envy, insinuated himself among the Tenescowri hoping to reach his fellow Malazans in the north.[25] But he was soon captured and imprisoned by the Seer.[26]

Envy and the others fought their way to the Seer's throne at Outlook despite the efforts of his K'Chain Che'Malle and his Omtose Phellack sorcery.[19][27] Unable to stop them, the Seer fled with Toc to Coral.[28] Tool left Envy's company to follow Toc on his own, but they were soon joined by Lanas Tog, who they discovered floating in Coral Bay aboard the wreckage of a Meckros city. Envy looted the warren of Poliel to sow the plague amongst the Pannions, delighted to beset the allies of the Goddess of Disease who had thrown in with the Crippled God. In the process she became somewhat estranged from Garath when he fell to the same sickness. Mok demanded she heal her faithful servant.[29]

Envy arrived at Coral amidst the Malazan siege of the city. While the three Seguleh, Lanas Togg, and Garath raced ahead inside the Seer's keep, Envy and Baaljag stumbled upon Picker's company of embattled Bridgeburners. She magically healed the gravely injured soldiers in return for their promise to help her locate and rescue Toc.[30] Envy slew waves of Urdomen soldiers, but Bridgeburners died all around her. After stumbling upon Toc's corpse, the Bridgeburners considered their deal complete and made to withdraw with his body. Miffed at being left alone, Envy headed to the keep's roof to seek revenge on the Seer.[31]

As Anomander Rake brought Moon's Spawn crashing down onto the keep to end the battle, Envy escaped by Warren bringing the Seguleh and Garath to safety with her. She complained to Rake, who responded that if he had known she was there he would have hit the keep harder. She warned the Tiste Andii that her blood whispered that Draconus plotted to escape Dragnipur. She was astonished by his lack of concern and reminded him how difficult it had been to slay her father the first time. She had merely stood by and not intervened at the time, but Rake declared Draconus had known better than to ask for her help.[32]

Later, Envy revealed to her companions that Rake had banished her and them from the city. The goal of their punitive mission complete, Envy announced she would escort the three Seguleh back to their island.[33]

In a vision, Udinaas witnessed Menandore and Sukul Ankhadu carrying the unconscious body of Sheltatha Lore. Sukul Ankhadu claimed that Sheltatha had taken Draconus as a lover and birthed "two horrid little children" named Envy and Spite. The two sisters planned to bury Envy's mother in the same Azath Tower that held Silchas Ruin, although Osseric warned against it.[34]

While traveling with Mappo Runt and Iskaral Pust, Spite warned that she could sense a terrible Convergence ahead and each of the three companions would have a role to play in it. Spite's role would put her "face to face with my evil sister at the very end, a meeting from which but one of us will walk away when all is done between us."[35]

At Coop's Hanged Man Inn in Malaz City, Braven Tooth chatted with the Tiste Andii castaway, Phaed. He was dazzled by her smile and inquired about her heritage as she appeared half human. Phaed told him her father was Nimander Golit, the first son of Anomander Rake, and her mother was Lady Envy, a former companion of Rake's who "got her revenge taking his son as a lover."[36]

In Toll the Hounds Edit

Lady Envy moved to Darujhistan, where she fell in love with the bard, Fisher kel Tath. Her estate was located next to Hinter's Tower and was described as small and elegant in a vaguely feminine way.[37]

Spite went to her sister's estate[38] and by means of sorcery, buried it in a giant ball of magma.[39] This was being observed by Envy. The two sisters then engaged in a sorcerous duel.[40]

Envy and Spite later turned up at the scene of the duel between Dassem Ultor and Anomander Rake where they fought against Hounds of Shadow. They abandoned their quest for Dragnipur when Caladan Brood arrived.[41]

During the Seguleh mass expedition to Darujhistan, three Seguleh attempted to bring the renegade, Thurule, back into the fold. Instead he removed his mask and crushed it under his foot. Miffed at Thurule by the loss of his "mysterious cachet", Lady Envy released him from her service.[42]

Envy and Fisher parted ways and Envy was soon part of the court surrounding the reborn Tyrant. There she had an unexpected encounter with her father, Draconus, which caused her to faint in shock.[43]

At the time of Mother Dark's ascension, Envy and her triplet sisters, Spite and Malice, lived with Draconus and their brother Arathan at Dracons Hold in Kurald Galain and appeared to be young girls.[44] It was implied that the mother of Envy and her sisters was in fact Olar Ethil, not Sheltatha Lore as previously thought, however, there was still some ambiguity over that statement.[45]

Their father told them that they would age like normal Tiste until they reached the age of eight or nine. Afterwards they would only mature after experiencing death-like trauma. Envy and Spite convinced Malice that if she died she would return more powerful than her hated older sisters. Malice agreed, so Spite strangled her.[46] When Malice remained dead, the two sisters hid the body and concluded that they needed to murder any who would notice she was missing, so they set about murdering the Dracons household staff.[47] Their murder spree appeared short lived when house surgeon, Atran, overpowered them both. Only the sudden appearance of a reanimated Malice saved them.[48] Afterwards, the girls hid in the walls of the Hold until Malice's deathlike stench became too much and they locked her in a blazing kitchen oven.[49]

"Her unbound black hair hung full and straight down to the small of her back. Her lips were painted a deep, vaguely menacing red. The kohl above her eyes contained the hues of dusk."
―Description of Lady Envy[src]

"Lady Envy’s sorcery...As in legends of old, hers was a power that rolled in broad waves, stripping the life from all it swept over, devouring rank upon rank, street by street, leaving bodies piled in their hundreds. She was...the daughter of Draconus – an Elder God."
―Toc the Younger reflecting on Lady Envy[src]

Lady Envy: "Have we met before?"
Tool: "No. None the less, you are known to me."
Lady Envy: "So it seems! It was, I admit, over-modest of me to assume that I would not be recognized. After all, I've crossed paths with the T'lan Imass more than once. At least twice, that is."
―Lady Envy meeting the T'lan Imass First Sword, Tool (Onos T'oolan)[src]

Lady Envy: "Walk with me, dearest. There, isn't this nice? The brushing contact of our hips, the sudden familiarity that sends the heart racing. The dampness of the rain, matching--"
Toc the Younger: "Yes, yes, Lady! Please, no more details, else my walking prove most awkward."
―Toc attempts to resist Envy's charms[src]

Spite and Envy by Shadaan 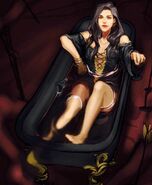 Lady Envy and Garath by Artaya

Retrieved from "https://malazan.fandom.com/wiki/Envy?oldid=98793"
Community content is available under CC-BY-SA unless otherwise noted.