Bottle: "You want a salute, Captain? Which one? I have plenty of salutes to choose from. Any preference?"
Faradan Sort: "The salute that tells me you have just become aware of the precipice I am about to kick your ass over. After I shove the sack of bricks up it, of course."
―Bottle meets Faradan Sort[src]

Faradan Sort was originally with the Malaz 8th Army,[citation needed] but joined the 14th as a captain of the 8th Legion's 9th Company after the Battle of Raraku.[1] She replaced Captain Kindly, who Fiddler suspected had been sent to shape up a company worse off than their own.[2] Her Lieutenant was Madan'Tul Rada.[3]

She was a tall, straight-backed woman, who spoke with a Korelri accent.[1] She had once worn her hair long, but now kept it cut short to keep it out of the way.[4] Lieutenant Pores thought her icy and calculating, a woman of few words, and an example of cold iron.[5]

In her experience, it was the luck of Oponn that determined whether a soldier lived or died in battle. A soldier's skill was less important than the Lord's push or the Lady's pull.[6]

Sort kept her sword in a scabbard decorated with silver tracing.[7]

She could not abide Scorpions[1] or other vermin.[8]

After the Battle of Raraku, Leoman led the Army of the Apocalypse westward to Y'Ghatan and the 14th Army followed. Sort was assigned as Captain to Fiddler and Gesler's squads (among others) in the 14th[9] to whom she was a stern but capable officer. In her first appearance at her new command, she crushed the 4th squad's champion scorpion, Joyful Union, under her heel, earning murderous intentions from Bottle and Cuttle. Then she ordered all of the squads in her company to reform their haphazard bivouacs into an organised manner.[1] When Bottle was insubordinate at their first meeting he gave his name as "Smiles", leaving the real Smiles to later wonder what she had done to deserve the discipline of carrying a double load.[1]

Koryk believed the new captain was a former section commander of the Stormwall based on the decoration of her sword scabbard.[7] She would only say that the scabbard's original sword "got left behind...in somebody."[10] Kindly attempted to take the measure of his replacement, but Sort remained aloof. Kindly's constant bickering with Lieutenant Pores led Sort to believe the two were idiots.[5]

Adjunct Tavore Paran launched the Last Siege of Y'Ghatan by sending the army's sappers to breach the city's wall under the cover of night. First into the city were the Malazan marines, followed quickly by the heavy and Medium infantry. Fist Keneb entered the city after its western edges were secure and sent Faradan Sort ahead to make contact with the advance squads.[1] But when enough Malazans were engaged in street fighting inside the city, Leoman sprung his trap. The city's olive oil-soaked buildings were set alight and the streets quickly became an inferno. Sort and Madan'Tul Rada were caught in the flames until they spotted Sinn stumbling towards them. They noticed wherever the mage moved, flames died in swirling darkness. Sort quickly directed Sinn to create a tunnel through the flames, leading Fists Keneb and Tene Baralta and nearly eight hundred Malazans to safety.[11]

Unaware that any had survived, the 14th Army made haste for the Kokakal Sea to embark on Admiral Nok's ships and escape the Bluetongue Plague ravaging Seven Cities. Sinn's mutterings convinced Sort to effectively desert, staying behind without permission to search for survivors. After three days the pair discovered the place where Bottle and the others had nearly tunneled out from beneath the city and helped them escape. Sort nearly stomped on the rat that had led survivors to safety before Bottle intervened.[12]

Before marching west to catch up with the army, Captain Sort reorganised the shattered survivors, promoting Urb to Sergeant and placing him in charge of the newly created 13th squad.[13][14] She also seemed to tacitly confirm she had served on the Stormwall.[15]

When the survivors finally caught up with the 14th Army on the coast, Captain Sort led the group into camp.[16] As Sort was considered a deserter, Madan'Tul Rada had been promoted to Captain and assumed command of her company.[17][18] She surrendered herself to Adjunct Tavore to face execution for desertion, but Fiddler warned that if the Adjunct hanged Sort, she would have to hang them all. Without Sort, their bones would still be under Y'Ghatan.[19] Adjunct Tavore ultimately restored Sort to the 9th Company's command and presented her and Sinn with the first badges bearing the new Bonehunters sigil designed by T'amber.[20]

She was Fist Keneb's forward officer in the Malazan invasion of the Letherii Empire, maintaining contact with the forward marines with the help of Beak.

In Dust of Dreams Edit

Sort eventually admitted to having survived the Stormwall during the Bonehunters' march through the Glass Desert.

After the battle against the K'Chain Nah'ruk, Sort was promoted to Fist.[21]

"You are a veteran, I see. You might think that fact yields some relief on my part. It does not. I do not care where you have been, who you served under, or how many officers you knifed in the back. All I care about is how much you know about fighting."
―Faradan Sort introducing herself to Fiddler[src] 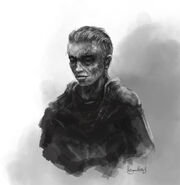 Faradan Sort by Coalhands
Add a photo to this gallery

Retrieved from "https://malazan.fandom.com/wiki/Faradan_Sort?oldid=97817"
Community content is available under CC-BY-SA unless otherwise noted.