Forge of Darkness is the first novel of Steven Erikson's Kharkanas Trilogy, a prequel series that takes place hundreds of thousands of years before his Malazan Book of the Fallen series. It was first published in the UK and US in 2012.

It is the Age of Darkness and the ancient land called Kurald Galain — home of the Tiste Andii and ruled over by Mother Dark — is in a perilous state. The great warrior hero, Vatha Urusander, is being championed to take Mother Dark's hand in marriage but her Consort, Lord Draconus, stands in the way of such arrogant ambition.

As the impending clash between these two rivals sends fissures rippling across the realm and rumours of civil war flare up, so an ancient power emerges from seas once thought to be long dead. None can fathom its true purpose nor comprehend its potential. And in the middle of this seemingly inevitable conflagration stand the First Sons of Darkness — Anomander, Andarist and Silchas Ruin of the Purake Hold — and they are about reshape the world...

Here begins an epic tale of bitter family feuds, of jealousies and betrayals, of wild magic and unfettered power...and of the forging of a sword.

Forge of Darkness takes readers to Kurald Galain, the Warren of Darkness, and tells an epic tale of a realm whose fate plays a crucial role in the fall of the Malazan Empire. It's a conflicted time in Kurald Galain, the Warren of Darkness, where Mother Dark reigns. But this ancient land was once home to many a power… and even death is not quite eternal. The commoners' great hero, Vatha Urusander, longs for ascendency and Mother Dark's hand in marriage, but she has taken another Consort, Lord Draconus, from the faraway Dracons Hold. The idea of this union sends fissures throughout the realm, and as the rumors of civil war burn through the masses, an ancient power emerges from the long dead seas. Caught in the middle of it all are the Sons of Darkness, Anomander, Andarist, and Silchas Ruin of the Purake Hold. 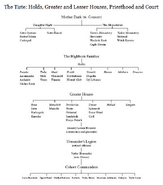 In These Gifts the Shapes of Adoration[]

The Solitude of This Fire[]

The Proofs of Your Ambition[]

The Forge of Darkness[]

Community content is available under CC-BY-SA unless otherwise noted.
Advertisement