"I've punched a lot of faces in my day, but never one belonging to a High Mage before."
―Gesler[src]

Gesler [Guess-ler][1] was a Falari[2] and corporal in the Malazan Coastal Guard near Hissar.[3] He had originally been a captain in the Malaz 1st Army under the Old Guard but was busted down first to sergeant then corporal, presumably in the wake of Laseen's restructuring of the command. Along with Stormy, he was one of the last members of that army's Boar Cult.[4][5]

According to one of Moak's hunches, Gesler had been an under-age marine when he served either Dassem Ultor, Cartheron Crust, or Urko Crust.[6]

He and Stormy had been friends since they were young.[7]

Gesler's face was "flat and wide, evincing north Kanese blood somewhere in his ancestry". He kept his head shaved.[8]

Gesler and his crew were attacked in their homeport during the Seven Cities rebellion (the Whirlwind). Aided by Duiker and cadre mage Kulp they fought their way to the Ripath and retreated by sea. With Hissar burning and no obvious safe harbour nearby, Gesler followed Kulp's orders to travel to Otataral Island to pick up historian Heboric Light Touch. Accompanying him were Stormy and Truth.[9]

After rescuing the historian and his companions Felisin Paran and Baudin, they travelled into the Nascent where they commandeered the abandoned vessel Silanda.[10] This vessel was briefly pulled through a Warren where he, Stormy, and Truth somehow began the process of becoming Ascendants. Their skin took on a bronze hue becoming as strong as stone, and their strength and endurance rose to well above normal.[11][12]

By coincidence, the Silanda met Fist Coltaine and his Chain of Dogs at Vathar Crossing. Gesler joined Coltaine's army and was punched in the face by the Fist before accepting promotion. The punch broke Gesler's nose and shattered Coltaine's hand. Gesler was still referred to as Corporal after the event so being called 'Captain' by Bult might have referred to his command of the Silanda only.[13]

Gesler took many of the 7th Army's wounded by ship to Aren, arriving only after the battle ended below its walls. He, Stormy, and Truth rescued Bent and Roach from the site of the Fall before locating Duiker's body among the crucified prisoners along Aren Way.[14]

In House of Chains Edit

Adjunct Tavore Paran arrived in Aren with the newly formed Malaz 14th Army to take back Seven Cities from the rebels. She ordered the Silanda impounded, and Gesler was made sergeant of the 5th squad Marines in the 8th Legion. His squad included Truth, Tavos Pond, Sands, and Pella with Stormy as corporal. He immediately recognised fellow sergeant Strings as Old Guard before discovering his true identity.[15] The dogs, Bent and Roach, accompanied his squad as well.[16]

Pearl and Lostara Yil tracked down Stormy, Gesler, and Truth to question them regarding Felisin Paran. Gesler agreed to answer their questions if they paid off his and Stormy's debts with Oblat.[17]

Their company captain, Keneb, suspected the odd looking Gesler, Stormy, and Truth of serving in a martial cult, an action forbidden in the Malazan Military. Thus, he did not deem them trustworthy and kept their squad and a few others eating dust in the army's rearguard while on the march.[18] Later, Gesler commiserated with Fiddler over lost friends. He correctly deduced that Fiddler was thinking of deserting because the Bridgeburner feared the responsibility of command.[19]

On the way to battle the Army of the Apocalypse at Raraku, his, Borduke's, and Strings' squads had competing desert scorpions on which they wagered. Gesler's squad named their In Out scorpion "Clawmaster". During the inspection of the combatants, Gesler made it clear he was sure he was being conned, but participated anyway. Gesler's prediction came true, and Stormy attempted to draw his sword on the cheaters, but Gesler held his friend back saying they had sworn their approval of the entrants.[20]

Before reaching Raraku, the army was stung several times by attacks from Leoman's desert raiders. Adjunct Tavore laid an ambush for their opponents, but Fist Gamet was seriously injured in the fighting. Gesler and Pella pulled the old man to safety.[21]

After the Battle of Raraku, Lieutenant Ranal led Gesler's, String's, and Borduke's squads on a chase after Corabb's fleeing desert raiders. Gesler's squad fell behind before noticing four bizarre armoured men charging their position on horseback. Gesler ordered Sands to fire a cusser at their attackers and deemed them dead after the explosion. The four men were actually Seneschal Jorrude and his Tiste Liosan who sought vengeance against Gesler, Stormy, and Truth for their trespass into Kurald Thyrllan. The four survived the blast but determined to bring justice to an easier target, such as the dragon who had pulled the Silanda in its wake.[22]

Gesler, Stormy, and Truth could no longer get drunk after their trip through the warrens. Gesler considered it a curse.[23]

After the Battle of Raraku, Leoman led the Army of the Apocalypse westward towards Y'Ghatan and the 14th Army followed. Adjunct Tavore wanted to send some of her people ahead to reach the city first, so she chose Gesler's squad to accompany Quick Ben and Kalam Mekhar. The group travelled via the Imperial Warren, but due to the problems with the Warrens travel was difficult and confusing, and Gesler grew testy with the High Mage.[24] The sudden appearance of at least a dozen K'Chain Che'Malle Skykeeps in the air above led Quick Ben to immediately cancel the plan. He brought the group back to the Malazan world to report the news to the Adjunct.[25]

Gesler was one of those who escaped the Last Siege of Y'Ghatan by tunneling their way out of the city.[26]

According to Beak, Gesler, Stormy, and Truth had been reforged in the fires of Tellann.[27]

In Dust of Dreams Edit

Gesler and his tent-mate Stormy were abducted from the Bonehunter army camp by the K'Chain Che'Malle and Gesler was installed as their Mortal Sword. With the help of Stormy as well as Sinn and Grub they defeated the K'Chain Nah'ruk.

Gesler and Stormy lead the K'Chain Che'Malle to join up with the Bonehunters. Gesler was killed by Sister Reverence while rescuing the heart of the Crippled God.

Stormy and Gesler with their Ve'Gath mounts by Corporal Nobbs 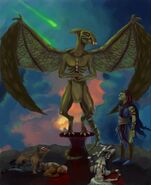 Atop the Spire by Grimhilde
Add a photo to this gallery

Retrieved from "https://malazan.fandom.com/wiki/Gesler?oldid=95135"
Community content is available under CC-BY-SA unless otherwise noted.