Hellian was a nineteen-year-old sergeant of the city guard in the Septarch District of the city of Kartool.[1][2] She harboured a deep and abiding phobia about spiders and as there were plenty of them in Kartool, maintained a more or less permanent state of inebriation to avoid going into hysterics over them. Upon first meeting her, Banaschar inferred to her that the lack of sobriety was probably the reason she had not been promoted to the vacant rank of captain in her district.[3]

She was described as a soft-featured woman with bright always wet lips.[4]

Hellian was called by Banaschar to investigate trouble at the Grand Temple of D'rek in Kartool. Upon breaking down the doors, they found everyone inside slaughtered. Banaschar then disappeared, leaving Hellian to predict to her corporal, Urb, that they would be in trouble over this and be sent off to some trouble spot.[5]

Hellian was proved correct and found herself and the other witnesses transferred far away to the Malaz 14th Army,[6] via Malaz City, then Nap and Unta. They joined up with the 14th when the army was resupplied with troops on the way to Y'Ghatan.[7][8] Her undersized squad consisted of only Urb, Brethless, and Touchy.[9] Hellian kept her squad bivouacked by the rum wagon, but Cuttle commented that she never seemed so drunk she could not keep her eyes open and that she had a capable corporal.[10]

Hellian was one of the group of soldiers who survived the Last Siege of Y'Ghatan by escaping through tunneling their way out from under the city.[11] As she would not go underground due to her fear of spiders, her corporal Urb knocked her out and carried her into the tunnel.[12] By the time they escaped the smoldering ruins, the 14th Army had made its way to the coast of the Kokakal Sea to be removed to safety by Admiral Nok's fleet ahead of the plague spreading through Seven Cities. Hellian and the other Y'Ghatan survivors caught up to the 14th Army in time to join them.[13]

The Malazan fleet brought the 14th Army to Malaz City where Empress Laseen waited to meet the Adjunct in Mock's Hold. Tavore ordered all but her escort ships to remain anchored in the harbour, but Hellian was so desperate for a drink that she jumped overboard fully armoured intending to swim to the docks. Touchy and Brethless were startled, but decided it was better she drown than they get in trouble for alerting anyone.[14] Amidst the crowds, she was enraged to spot Banaschar, the priest who had ruined her life at Kartool and set her on the path into the army. She angrily dispatched Saygen Maral, the Claw assassin attempting to kill Banaschar, claiming the priest was hers to put under arrest. Then she dragged the priest past the city's violent mobs into Smiley's to answer questions and buy her a drink.[15] The two eventually exited Smiley's in a drunken stupor just as Fiddler, Gesler, and Stormy passed on the street outside with Legana Breed. The 14th Army officers safely brought them back through the angry mobs on the waterfront to the 14th Army's ships.[16]

Adjunct Tavore clashed with Empress Laseen at Malaz City and took the Bonehunters rogue, following the Tiste Edur fleet that had ravaged Sepik back to Lether.[17] Tavore invaded the Letherii Empire, burning her transport vessels on the shoreline and spreading the marines in isolated pairs of squads across thirty leagues of coast. The marines moved forward into the Letherii countryside towards Letheras, the capital, with orders to kill Edur by night and stir the occupied Letherii into rebellion. Each squad had a mage responsible for hiding their presence and confusing their enemies.[18] Fist Keneb followed in their wake with six squads of marines, while Captain Faradan Sort and Beak attempted to keep lines of communication open between both groups.[19]

Hellian was put in charge of the newly reorganised 8th squad.[20] In her constant inebriated state she came to believe Touchy and Brethless were a single four-armed corporal named "Touchy Brethless".[21][22] Others like Maybe she had trouble remembering because of their "stupid" names.[23]

Hellian's squad was paired with Urb's for the landings. When they assembled on the beach, Urb found her arranging casks of rum she had salvaged from the burning ships amongst her squad.[24] The two squads remained together and Bowl and Balgrid used magic to cover their tracks.[25] In their first action, they defeated a troop of Edur at Boaral Keep where Lutes had rested his crossbow on her back to fire as she vomited. They acquired the Edur's mounts at Hellian's suggestion and pushed hard inland for the capital, fighting from tavern to tavern.[26] The two squads began taking trophies of ears and fingers and tying them to their belts.[27]

Contrary to the Adjunct's expectations, the Letherii soldiers did not use the Malazan invasion to turn against their Edur occupiers.[28][29] When the two squads ambushed a mixed mounted troop of Letherii and Edur, the Letherii veterans recovered more quickly than expected and killed Hanno--the Malazans' first casualty.[30] In the aftermath, an inebriated Hellian tried to bed a terrified Urb before being interrupted by the arrival of Faradan Sort and Beak. Hellian and Urb's mounted squads were well ahead of the others. Sort approved, but asked them to pace themselves while she got the other marines on horseback.[31]

As the marines neared Letheras fighting became more desperate, although Hellian earned the support of the Letherii slave and Indebted classes by changing tactics to slay the government officials, lawyers, moneylenders, and debt-holders in each village. Then they stayed in the village tavern--decorated with the severed heads of their victims--until it was dry before moving on to the next.[32] Fiddler and Gesler's squads found them drinking and singing at a tavern a day's travel from the capital. Fiddler did not approve, but could not argue with Hellian's success where all the other squads had failed miserably.[33]

Almost as soon as the marines were reunited, a force of hundreds of Edur enveloped the village.[34] During the fighting, Urb was an exhausted nervous wreck just trying to keep Hellian alive as she had somehow traded her shield for the lid of an ale cask. An Edur lance pinned his side as he tried to protect her. Only the healing magic of Mulvan Dreader saved his life.[35] The Edur were repelled by the arrival of Badan Gruk, Sinter, and Primly's fresh squads.[36] The new arrivals deferred to Fiddler's seniority, and the former Bridgeburner ordered the marines to hold their position in hopes they would be reinforced by Fist Keneb.[37]

While they waited, Hellian became the object of Skulldeath's affection after drunkenly announcing that she was the "Queen of Kartool".[38] The notoriously celibate soldier, and last in his family line, was saving his seed for a woman of royalty.[39] From then on he was besotted with her, announcing he had given his heart to her and following her everywhere.[40][41] Hellian returned the favour, forcing Primly to step in and pry them apart.[42]

By the time Keneb's forces arrived, thousands of Edur followed in their wake, pushing the gathered Malazans towards the city where the Imperial Brigade awaited.[43] Caught between the two armies near Kravos Hill, the 800 remaining Malazans[44] were forced to huddle under Beak's protective spell when the Letherii mages cast a deadly ritual of Chaos upon them and the Edur. The spell was broken, but the hair of all those under Beak's protection turned white.[45] (Hellian had passed out during the event and awoke to think everyone was pulling an elaborate trick on her by bleaching their hair, but left her empty flask on Beak's barrow).[46] The Edur abandoned the field after their allies' betrayal, and the shaken Imperial Brigade withdrew to meet Adjunct Tavore's more threatening main force as it disembarked from the Lether River.[47]

Keneb marched on Letheras thinking the marines deserved to be the first to enter the capital.[48] After the marines found a hidden entrance beneath the wall, Hellian, Urb, Fiddler, and Gesler's squads were sent into the city to cause trouble while the remaining marines opened the city's west gate to Tavore's infantry. Hellian's squad quickly disappeared into a local tavern and Urb was tasked with finding them.[49] He found her threatening to hang a Letherii barkeep unless he revealed the tavern's hidden stock.[50] After the main force of Malazans entered the city, the City Garrison surrendered and the city fell.[51]

Over the course of the Malazan series, Hellian developed a reputation as a sergeant whose troops survived battle.

In Dust of Dreams[]

During the final battle of the Malazan marines and Hedge's Bridgeburners at which they defended the Crippled God, Urb at last confessed his love for Hellian,[52] to which she responded enthusiastically.[53] Both Hellian and Urb were amongst those who survived the battle.[54] 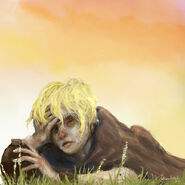 'The terrible, terrible dawn' - Interpretation of Hellian by Corporal Nobbs 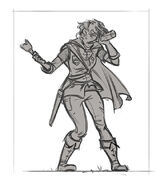 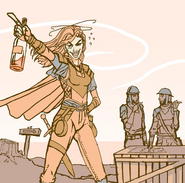 Hellian: "All right, get outa my tent so I can get decent."
Brethless: "You’re not in your tent, Sergeant, you’re in our latrine ditch."
Hellian: "That explains the smell."
Brethless: "None of us used it yet, Sergeant, seeing as how you were here."
Hellian: "Oh."
―Just another 'morning after' wake-up call for Sergeant Hellian[src]