Malazan Wiki
Register
Don't have an account?
Sign In
Advertisement
in: Males, Priests and acolytes, Soldiers,
and 4 more
English

Itkovian was described as having long hair.[3] He wore a blue chain surcoat beneath a grey rain cape and wrist-length cuffed gauntlets,[4] boots,[5] and a helm with visor and cheek guards.[6] The visor had black-iron bars and the gauntlets were described as armoured.[7] Itkovian had a grey sash tied about his waist and wore a broach denoting his rank.[8]

The Destriant Karnadas thought Itkovian someone who stood in a cold, closed-in fashion and who was 'black mannered'.[9] He maintained a personal vow of celibacy although his sect did not require it.[10]

As Shield Anvil, Itkovian's position "demanded both scholarly pursuits and military prowess". He studied history, philosophy, and religion in order to formulate tactics and strategy based on an accurate understanding of both enemies and allies. While in Capustan, he was a keen observer of the city.[11]

Itkovian was amongst the Grey Swords hired by Prince Jelarkan to defend the city of Capustan from the Pannion Domin's forces. Before the start of the seige, Itkovian led two wings of Grey Sword cavalry on patrol outside the city. His party stumbled upon an undead K'Chain Che'Malle K'ell Hunter and managed to bring it down with their skilled tactics but not before the creature killed two-thirds of his command. They were soon joined by an army of 14,000 Kron T'lan Imass drawn by the summons to the Second Gathering. The T'lan Imass allied with Itkovian to track down and kill more hunters, with the Grey Swords acting as bait. They dispatched six hunters attacking a caravan. In this way, they rescued Gruntle, Stonny Menackis, Keruli, Hetan, Cafal, Bauchelain, Korbal Broach, Emancipor Reese, and Buke and brought them back to the city.[11]

He led the Grey Swords after the death of Brukhalian. He was recovering from wounds when a traitorous message was sent from Rath'Fener to the Mortal Sword. Brukhalian followed orders although he knew he was going to his death, leaving the messenger to tell Itkovian where they had gone when he woke up. Upon learning their fate, Itkovian gathered the last of The Grey Swords and moved to Prince Jelarkan's keep to fulfill their contract. They discovered the Prince already dead and Anaster sitting on his throne. They routed the Tenescowri and held the keep until the liberation of Capustan by the Barghast. Once it was clear that most of the enemy had been cleared Itkovian took the last of the Grey Swords to the Thrall to exact retribution for the betrayal of the Grey Swords to the Pannion. He did this in the traditional way, removing Rath'Fener's hands. But then he took on the false priest's grief as befitted his position as Shield Anvil. Although Captain Paran of the Bridgeburners attempted to stop him, warning him of the dangers of doing so without a god to hold him together, he took on the grief of all of Capustan, cleansing it. He was helped by Paran and Mallet. Although offered a new blessing of his vows by the new god of war, Trake, he refused and told Rath'Trake that the Grey Swords would continue to be sworn to Fener, though he now walked the mortal realm. 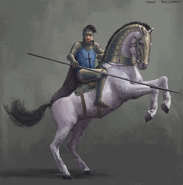 Itkovian at Corall by Erdgeist 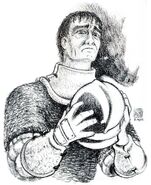 The Siege of Coral[]

When Silverfox attempted to force the T'lan Imass to aid Onearm's Host against the Domin at Coral, they were reluctant due to their fatigue at the endless fighting to which they consigned themselves. Itkovian recognized this and performed his duty as Shield Anvil, taking all their grief, pain, and memories into himself so that the T'lan Imass might pass on to the afterlife. Without Fener to help him perform the task, their sheer numbers and the intensity of their grief killed Itkovian. He was only thirty years old at the time. He was buried under a pile of tokens placed by the T'lan Imass and Onearm's Host, which was then blessed by the Imass to never be destroyed.[12]

Itkovian ascended to become the Redeemer, a god worshipped by the humans of Black Coral. With the death of Anomander Rake, the Redeemer learned the true depth of his role and, with Mother Dark, destroyed the Dying God.

"I am the bearer of Fener's grief. I am my vow incarnate. This, and in all that follows. We are not yet done here. I am not yet done. Behold, I yield to nothing."
―Itkovian[src]

Itkovian: "As Shield Anvil, my faith demanded that I relieve others of their pain. In the name of Fener, I was to bring peace to souls, and to do so without judgement. This I have done."
Stonny Menackis: "But your god’s gone, so who, in Hood’s name, did you deliver those souls to?"
Itkovian: "Why, no-one, Stonny Menackis. I carry them still."
―Itkovian and Stonny Menackis[src]

"We humans do not understand compassion. In each moment of our lives, we betray it. Aye, we know of its worth, yet in knowing we then attach to it a value, we guard the giving of it, believing it must be earned. T'lan Imass. Compassion is priceless in the truest sense of the word. It must be given freely. In abundance"
―Itkovian[src]