K'ell Hunters were large K'Chain Che'Malle bred to serve as warriors.[1] Said to be the firstborn of every brood, they were the Matron's own children and answered only to her.[1]

K'ell Hunters stood on their hind legs like wingless birds twice the height of a man. Their forearms terminated in enormous curved blades that appeared fused to their wrists. A long, tapering, counter-balancing serrated tail allowed them to lean forward as they walked or ran. They ran on taloned, three-toed feet in silent strides greater than six feet across at twice the speed of a horse's canter. They could leap as many as twenty paces from a dead stop. They had flat, wide, faces with long snouts bristling with two rows of fangs. Their heads were topped by ornate skull-cap helmets which protected their head and nape and featured sweeping cheekguards that met in a bridge-guard over the snout. They often wore a kind of harness or armour made of leather and metal. It wrapped across their shoulders, covered their chests around their jutting sternums, and sat high on their hips.[2][1][3][4][5][6] They may also have decorated thenselves with stretches of brightly coloured cloth, shiny as silk.[6]

Their lifespan was approximately 1,000 years.[citation needed]

K'ell Hunters were nearly impossible to defeat by conventional mortal forces. Skilled and coordinated opponents could bring down individual Hunters at great cost.[7] Hunters were resistant to Sharpers, but proved vulnerable to Cussers.[8]

Millennia before the events of the Malazan Book of the Fallen the soul of a Matron became trapped in the Rent at Morn. The bodies of her children were buried in barrows surrounding her central tomb.[9] Through the mistaken efforts of Kilava Onass the Matron was eventually freed and she set about reviving her children bringing them back to a semblance of life in undead form. But the now insane Matron's control over her many hundreds of K'ell Hunters was co-opted by her adopted child, the Pannion Seer. The Seer used the nearly unbeatable Hunters to conquer the cities of eastern Genabackis and expand his Pannion Domin.[9][10][11]

During the Pannion War, the Seer sent his undead Hunters to Capustan to slay anyone outside the city and assist Septarch Kulpath's siege. Individual Hunters were first encountered by the necromancers, Bauchelain and Korbal Broach, whose sorcery and demonic servants could only drive them away.[12] A mounted Grey Sword patrol led by Itkovian was able to bring down individual Hunters with coordinated attacks with lassos and lances, but lost a third of their number.[13] The magic of Lady Envy and the superb combat skills of the Seguleh warriors, Mok, Thurule, and Senu, had similar success against individual Hunters to the south.[14]

The Hunters were only beaten in great numbers by armies of T'lan Imass and T'lan Ay. They killed more than 80 Hunters at Capustan.[15] At the end of the war at the Battle of Black Coral, the Malazans and their allies faced over eight hundred Hunters defending the Seer.[16] They were ultimately killed by the T'lan Ay.[17]

Travelling into the warren that formed Raraku's ancient memory, L'oric observed three K'ell Hunters stalking seven Deragoth. The Hounds lured the Hunters into an ambush and slew two in the space of a heartbeat. The third ran off and was not pursued.[18]

At the time of the sundering of Kurald Emurlahn, several hundred thousand years before the events of the Malazan Book of the Fallen, an allied force of four hundred thousand Tiste Andii led by Silchas Ruin and two hundred thousand Tiste Edur led by Scabandari invaded the Malazan world. They arrived on the continent of Lether through a violent rent and destroyed an army of K'Chain Che'malle, which included sixty thousand K'ell Hunters. Afterwards, Gothos encased the remains of the dead under a vast field of ice.[19]

In modern times, the Crippled God destroyed a Meckros city from below with a mass of ice. The wreckage of the destroyed city was brought to the Refugium by the goddess, Menandore. Amongst the debris, Udinaas and Feather Witch spotted blocks of melting ice riddled with the preserved corpses of strange, giant, reptilian creatures dressed in unusual armour.[20]

Kiska and Jheval came upon a K'ell Hunter in the Shadow realm. It had been savaged by the Hounds of Shadow, but still remained a deadly threat.[21] 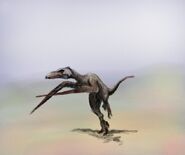 Interpretation of a K'ell Hunter by Corporal Nobbs 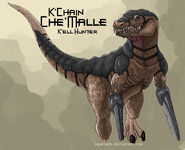 Interpretation of a K'ell Hunter, by Toraneko

Interpretation of a K'ell Hunter, by Toraneko 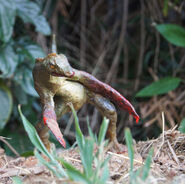 Interpretation of the Seguleh fighting a K'ell Hunter by Artsed

Interpretation of a K'ell Hunter by Jacob Gamm

Interpretation of an undead K'ell Hunter by Jacob Gamm

Retrieved from "https://malazan.fandom.com/wiki/K%27ell_Hunter?oldid=96466"
Community content is available under CC-BY-SA unless otherwise noted.