Mok was a masked Seguleh[1] warrior. Like his people, he rarely spoke to outsiders, instead using body language to communicate with those around him. The few times he did speak, his voice was rasping and cold.[2] He was short and lithe with dark eyes like chips of obsidian.[3]

He was also known as the Seguleh Third, the third highest societal rank amongst his people. As such, his mask was decorated with only twin slashes, one on each cheek.[3] For a time his mask also sported the mark of Lady Envy's "crimson, thickly planted kiss."[4]

He was an extremely skilled swordsman, fighting with two short blades with grace and a lightness of step. His skill was so immense that even Onos T'oolan, the First Sword of the T'lan Imass himself, was unsure whether he could defeat Mok.[5]

Thurule and Senu were frequently referred to as his brothers. Of the three, he was the eldest.[6][7] The Seguleh Second, Jan, also referred to Mok as his elder brother.[8]

In Memories of Ice[edit | edit source]

After the Pannion Domin invoked the wrath of the Seguleh nation by repeatedly sending proselytizing priests to its shores, Mok, Thurule, and Senu were sent as a "Punitive army" of three by the Seguleh First to slay the Pannion leader, the Pannion Seer.[9] The trio had not journeyed far before they were waylaid and ensorceled into the service of Lady Envy at the request of the Elder God, K'rul. At Morn, Envy gathered other unwitting servants to K'rul's plans against the Crippled God including Toc the Younger, Tool, Baaljagg, and Garath.[3][10]

Constraining the three strong willed Seguleh proved to be a significant drain on Envy's powers.[11] Senu was the first to challenge Tool to a duel to establish their relative rank despite Envy's control. The T'lan Imass appeared to easily knock the young Seguleh unconscious.[12] When Thurule chose to challenge Tool the contest went on much longer. It ended with Thurule knocked unconscious by a half-dozen blows to the head, along with a broken wrist and several ribs. Even Mok was taken aback when Tool revealed he had only used the flat of his blade.[13] At times, Mok's desire to challenge Tool became so strong that Envy had to magically put him into a sleep and have his brothers carry him by travois.[5]

Mok's exceptional fighting skills were displayed the first time the group encountered one of the Seer's K'ell Hunters. With his brothers at his flanks, the Seguleh Third stood motionless before the charging beast, decapitating it at the last possible moment.[5]

Lady Envy's party made its way to the borders of the Pannion Domin where they slew Seerdomin Kahlt and brought down his temple.[14] Then they fought their way to the Seer's throne at Outlook despite the efforts of his K'Chain Che'Malle and Omtose Phellack sorcery.[5][15] Unable to stop them, the Seer fled to Coral.[16] Tool left the others behind to follow the Seer and rescue his friend Toc more quickly on his own.

Mok and the others followed the Seer to Coral, arriving amidst the Malazan siege of the city. The three Seguleh carved their way through the Seerdomin and Urdomen guarding the Seer's keep. Separated from Lady Envy in the fighting, Mok encountered Tool and finally had the opportunity for the duel he had long desired. Mok managed to knock Tool's sword from his hands, but before he could land the killing blow was ambushed and knocked unconscious by Tool's sister Kilava in her Soletaken panther form.[17]

After the Seer's defeat, Envy discovered Mok as he regained consciousness. His mask was marred by a new crack that ran up two-thirds of the left side. Envy revealed that Anomander Rake had banished them from the city and she denied Mok's demand to challenge the Son of Darkness who unwittingly held the position of Seguleh Seventh. Instead, the goal of their punitive mission complete, Envy announced she would escort the three Seguleh back to their island.[18]

The Seguleh Second, Jan, described Mok as having returned from his punitive expedition "broken".[8] He was replaced as Third by Gall.[19]

Interpretation of Mok vs Tool by Enaglio 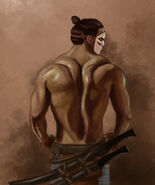 Interpretation of Mok by Grimhilde

Retrieved from "https://malazan.fandom.com/wiki/Mok?oldid=96427"
Community content is available under CC-BY-SA unless otherwise noted.