He was a brash and unsubtle young warrior who was still unblooded and unproven before his tribe. He was eager to strut before the opposite sex and as youngest was indulged by his brothers.[4] Rhulad misinterpreted Trull's reluctance to fight as weakness.[5]

Midik Buhn was his childhood companion and the two were often found engaging each other in sword practice.[7]

Rhulad was born too late to participate in the Edur War of Unification like his brothers and was eager to prove himself.[8] He frequently tried to puff himself up in front of Mayen, his brother Fear's betrothed,[7] and he enjoyed tweaking Trull's suspicions that he and Mayen were having an affair.[9] Tomad was often cuttingly dismissive of his unblooded son, publicly upbraiding him for his immaturity.[10]

Rhulad, his brothers, and Midik and Theradas Buhn were sent out on a quest by Hannan Mosag to the ice fields to the east. They were to retrieve a 'gift' seen in the Warlock King's visions, but were warned not to touch it.[11] During the perilous trek, Trull found Rhulad sleeping at his post and beat him for his shocking dereliction of duty. Rhulad denied the charge despite evidence that intruders had entered the camp and stolen their food during his watch.[12]

The Sengar party soon discovered that the gift was a sword frozen in the ice. As they prepared to recover it, they were attacked by scores of bestial Jheck. During the fighting, Rhulad retrieved the sword and slew several of the beasts attempting to attack from the rear. The youngest Sengar fell to the Jheck spears, but as his brothers prepared to bring his body home they discovered the sword could not be removed from his hands. Fear was comforted by the knowledge that Rhulad had died blooded and a hero.[13]

After death, Rhulad found himself on a beach near the tent of the Crippled God. The god was angered that Hannan Mosag had used their alliance for personal power and to make his people unassailable. But the god demanded conquest. He resurrected Rhulad, promising him the sword would increase the young warrior's power every time he died. Rhulad eagerly accepted.[14]

Rhulad's corpse returned to life just as the slave, Udinaas, completed the Edur ritual of encasing the body in a sheathe of coins and wax.[15] The reborn Rhulad was more balanced and assured, more hulking and bestial.[16] His voice was rough, raspy, and tinged with hysteria, and his skin was marred by burns wherever coins became dislodged.[17] He took control of the Edur from Hannan Mosag before a crowd of nobles, declared himself Emperor, and demanded his brothers and former king kneel before him. Once they did, he ordered Fear to surrender his betrothed, Mayen, to become his Empress, much to her horror.[18]

Using his powers as Master of the Deck, Ganoes Paran found himself before the Throne of Shadow on Drift Avalii. The Throne spoke in his mind calling out for the protection of Anomander Rake. It warned that the Tiste Edur sought the Throne and that they had been corrupted and their souls poisoned. It also stated that they were led by a new Emperor of the Edur, the Tyrant of Pain and the Deliverer of Midnight Tides, who had been slain a hundred times.[19]

After Rhulad's ascension to emperor, he sent Ahlrada Ahn and a company of Arapay warriors in search of the betrayers, Fear and Udinaas. When they came back empty handed, Rhulad was enraged and would have ordered the searchers all executed but for the intervention of Hannan Mosag. The Warlock King was able to impose some control on the emperor, explaining that there was a great need for Tiste Edur warriors in the new empire and even more would be needed for the vast expeditions that were being planned.[20]

Ahlrada Ahn recalled how he and Rhulad's "brothers"—the Emperor's "new extended family of cowering fawners—had supported his banishment of Trull and particpated in the shorning.[21]

Rhulad promoted his father, Tomad, and Hanradi Khalag to Preda and placed them in charge of the Third Edur Imperial Fleet (implying there were at least two others). The fleet was sent across the world to Seven Cities where it spent nearly half a year sailing the subcontinent's northern coast torturing and murdering those they found while seeking a champion to duel their unkillable emperor to the death. Hanradi claimed to abhor these actions, but said he was required to follow his emperor's commands.[22] Ahlrada Ahn accompanied Tomad's command and blamed the shadow of the "insane creature" that sat on the Letherii throne for its cruelty.[23]

The Edur also sought to reclaim the Throne of Shadow on Drift Avalii through which they could reclaim and restore the shattered Kurald Emurlahn. Ahlrada Ahn considered whether the power of the healed warren could break Rhulad's curse.[24]

Emperor Rhulad did his best to rule the empire, holding daily audiences with his subjects, rich and poor, to listen to their concerns and mete out justice. But he retained Ezagara's chancellor, Triban Gnol, who sought to isolate the Emperor from his fellow Edur and consolidate his own power. The chancellor controlled the information the emperor received, deciding who he was allowed to speak to and which reports he was allowed to read.[27][28] Bruthen Trana, Brohl Handar, and even Rhulad's father Tomad were all denied direct communication to the emperor.[29][27] Rhulad correctly saw Hannan Mosag as an enemy. After promoting him to Ceda, he ordered Mosag to crawl on his belly whenever he appeared in court.[30] Mosag quickly took to plotting with his K'risnan to pull the usurper from his throne.[31][32]

The emperor allowed First Concubine Nisall to decide whether to stay or go, and she had chosen to stay out of a mixture of pity and ambition. She became his lover and advisor, witnessing the Emperor of a Thousand Deaths relive each of his deaths in nightmares every night.[33] The appellation was a slight exaggeration as the emperor had only faced a few hundred champions, who had all killed him at least once and whose bodies were afterward interred in the grounds of the dead Azath Tower. A single Tarthenal had killed him seven times before ultimately succumbing.[34] Trull had implored him to give up the cursed sword, but Rhulad refused saying he was nothing without it. When Trull argued that the sword and the power behind it was the true emperor, Rhulad ordered him shorn, but in his sleep every night begged his brother for forgiveness.[35]

Rhulad's isolation contributed to his growing madness and paranoia. The chancellor spoke of conspiracies amongst the Edur against him and kept him focused on external enemies by stoking talk of war with the Bolkando Kingdom.[29][36] When Tomad and Hanradi Khalag returned with the fleet bearing the champions Icarium, Karsa Orlong, and others, Rhulad refused to speak with them fearing Tomad conspired against him for the deaths of Trull and Binadas. At the same time, he invoked Tomad's absence as evidence his father was in hiding with his fellow traitors.[29]

The Chancellor moved against his rival, Nisall, sending thugs from the Patriotists secret police to arrest her for treason. She was killed in custody by Karos Invictad after claiming she was pregnant with Rhulad's child. A secret war began outside Rhulad's notice between the Edur of the court and the forces of Gnol and Invictad.[37] The Chancellor also used Tomad and Uruth's ill-treatment and neglect of the mixed-blooded Edur they rescued from Sepik to drive a wedge between them and their son. When Rhulad learned their kin had been left in the city's trench-pens amongst slaves and criminals, the enraged emperor condemned his parents to a two month imprisonment in the flood-prone dungeon crypts of the palace's Fifth Wing.[38] Both drowned from rising floodwaters when their jailers mistakenly left them unattended for a week.[39]

Rhulad put off the contests against the latest batch of champions out of fear.[40] And the news that Adjunct Tavore Paran's Bonehunters had invaded the empire and were making their way to the capital made him more fearful. Rhulad placed the war in the hands of the Chancellor and Ceda as the Chancellor promised to protect him.[41] Then he ordered the contests in the arena to begin, making short work of Gadalanak, Puddy, and others.[42][43] He ruminated over the upcoming contests with Icarium, who some worshipped as a god,[44] and Karsa, who he learned had slain his brother, Binadas.[45][46] All the while he was tormented by the deaths of all those he once loved.[47]

As the Bonehunters invaded the capital, Rhulad faced off against Karsa Orlong in the arena. The emperor ineffectively hacked and slashed at the Teblor, while Karsa merely defended himself. It was only when the sword lunged of its own accord and speared Karsa through the leg that he went on the offense, severing Rhulad's sword arm at the shoulder. Once the sword was out of Rhulad's hands, Samar Dev released the spirits from her knife to envelop the sword and create a portal through Chaos into the warren of the Crippled God. Rhulad's body collapsed and died on the floor of the arena.[48]

Trull found his body there later while searching the palace for his brother. As he held Rhulad in his arms and wept over the lost chance to ask for forgiveness, he was himself slain by Sirryn Kanar from behind.[49] Rhulad's spirit awoke outside the Crippled God's tent where Karsa had left the cursed sword in the sand. The god urged Rhulad to pick up the blade and try again to make the world right and ask forgiveness of Trull. Karsa warned him to leave the sword, or else face oblivion if the Teblor was forced to kill his spirit. Rhulad reached for the sword and Karsa regretfully decapitated him. Withal later used the same forge that created the sword to destroy it.[50]
Significant plot details end here.

The Crippled God destroyed the Third Meckros city and rescued only Withal, a Meckros swordsmith. He enslaved the man to make a particular sword of his own design.[51] The result was a two-handed straight-bladed sword with a thin and strangely mottled blade. The blade was seemingly forged of polished iron and elongated black shards of some harder, glassier material, the surface of both cracked and uneven.[52][53][54] Only sorcery kept the blade's unusual materials from shattering at the first blow.[55] Its bell-hilt was shaped to resemble the links of a chain using the drawn twist technique of the Meckros.[54] Withal later mentioned that the black shards came from the broken pieces of two narrow-bladed, overlong knives.[56] It was possible that the shards were what was left of Silchas Ruin's swords which had been shattered by a K'Chain Che'Malle Matron's death-cry when the Tiste had invaded the Malazan world.[57]

Interpretation of Rhulad Sengar by slaine69

Interpretation of Rhulad Sengar by slaine69 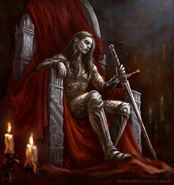