1
Steven Erikson (born October 7, 1959) is the pseudonym of Steve Rune Lundin, a Canadian novelist, who was educated and trained as both an archaeologist and anthropologist.

His best-known work is the completed ten-book fantasy series Malazan Book of the Fallen, which by 2006 had sold over 250,000 copies.[1][2] SF Site has called the series "the most significant work of epic fantasy since Donaldson's Chronicles of Thomas Covenant,"[3] and Fantasy Book Review described it as "the best fantasy series of recent times."[4] Fellow fantasy author Stephen Donaldson, refers to Erikson as "an extraordinary writer".[2] In an interview with sffworld.com, Erikson acknowledged that he originally doubted the series would become "mainstream", and was subsequently surprised at how successful the series has been.[5] He also noted how people "either hate the series or love it".[5]

Steven Erikson was born in Toronto, Canada, and grew up in Winnipeg.[6] He subsequently lived in the UK with his wife and son[6] before returning to Canada to live in Victoria, B.C. in 2012.[7][8]

He is an anthropologist and archaeologist by training, receiving his undergraduate degree in anthropology (with minors in History and Classics)[9] at the University of Manitoba.[10] While at university, he also took courses in fiction writing, and in 1983 he dropped out of a Master's program in archaeology to join the undergraduate Creative Writing program at the University of Victoria.[11] He completed his formal education as a graduate of the prestigious Iowa Writers' Workshop.[12]

For his thesis at Iowa, Erikson wrote a "story cycle" of short stories titled A Ruin of Feathers about an archaeologist in Central America. Subsequently, Erikson received a grant to finish the work which was published by TSAR, a small Canadian publishing house. For his next work Erikson co-won the Anvil Press International 3-Day Novel Contest for which he signed away the rights, a mistake he attributes to inexperience. Erikson's third book was also published by TSAR, and consisted of a novella and short stories titled Revolvo and other Canadian Tales. Later, upon moving to England, Erikson sold what he refers to as his "first real novel" to Hodder and Stoughton — This River Awakens — written when he still lived in Winnipeg. The first four books were published under Erikson's real name, and are currently out of print.[13]

All the while, Erikson continued working as a field archaeologist, specialising in lithics (stone tools) and rock art, and eventually amassing 18 years in the profession.[14] When Erikson moved to the UK with his English wife in 1995, he worked for a time in the communications department of the Toyota UK head office in Redhill[15] due to a lack of opportunities in the field of archaeology.[14] He described his role as that of a kind of temp in the communications department and he lived in Dorking at the time.[16] It was during this time that he decided to make the transition to a writing career.[14]

Malazan Book of the Fallen series[]

Steven Erikson and Ian Cameron Esslemont first met at an archeological dig at the site of Mud Portage, Ontario, Canada. According to Steven Erikson, they didn't role-play until their second season there, when Cam introduced AD&D. Erikson remembered that they failed at it in "spectacular, drug-induced fashion".[17]

The Malazan world was devised by Erikson and Esslemont initially as a setting for a role-playing game.[18][19] Gardens of the Moon began as a movie script but evolved into a novel, which Erikson completed in 1991-92 but failed to sell.[20]

In the late 1990s, Transworld - a division of Random House - bought Gardens of the Moon and requested Erikson write additional books in the series.[16] Using the history of the Malazan world he created with Esslemont, Erikson plotted nine additional novels. After the publication of Gardens of the Moon, reviews spread via the internet, and Orion publications attempted to lure Erikson away from Transworld. However, Transworld retained an option on additional novels in the series and offered £675,000 for the remaining nine books of the series.[16]

Erikson has stated explicitly that he enjoys playing with and overturning the conventions of fantasy, presenting characters that violate the stereotypes associated with their roles.[5] Erikson deliberately began the Malazan Book of the Fallen series mid-plot rather than beginning with a more conventional narrative.[5][18] Erikson's style of writing includes complex plots with masses of characters. In addition, Erikson has been praised for his willingness to kill central characters when it enhances the plot.[6]

Erikson explained that he changed the terminology he used over the course of writing the series, including for example, that of some units of length. For his full response read his answer to question 37 of the Tor Q&A session[22]

Erikson's first novel of the Malazan Book of the Fallen series, Gardens of the Moon (1999), was critically acclaimed. It was short-listed for a World Fantasy Award.[1] It has also earned him the reputation as one of the best authors in the fantasy genre,[1] and was described as "An astounding début".[2] The novel was acclaimed for its "combination of originality and intelligent, strong and exciting storytelling".[1] The second book in the series, Deadhouse Gates (2000), was voted one of the ten best fantasy novels of 2000 by SF Site.[23]

During a 2008 question and answer session in Seattle, Washington, Erikson stated he had signed a deal to write two more trilogies and six novellas.[24] Erikson planned to use the novellas to continue the Bauchelain and Korbal Broach storyline,[25] while one of the trilogies would be a prequel to the main series detailing the history of Anomander Rake and Mother Dark.[24] During the same interview, Erikson stated that the upcoming book in the main series, Dust of Dreams (which was released in the United Kingdom August 18th, 2009) would be the first novel to end on a cliffhanger.[26]

Some of Steven Erikson's poems from the Malazan books have been set to music by Canadian acoustic alt-folk duo October Gold on their album "Bridge of the Sun".[27] It has also inspired a Salt Lake City based Epic Black Metal band called Caladan Brood, formed by a duo dubbing themselves Mortal Sword and Shield Anvil.[28][29] 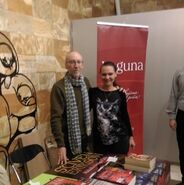 Comments attributed to Steven Erikson from book signings and other sources[]

Other Authors On Steven Erikson and the Malazan series[]