Edit
This page serves as a guideline to the order in which to read all of the novels, novellas and short stories of the Malazan World.
Several different options are listed.

Malazan Book of the Fallen - Main series by Steven Erikson[]

Recommendation: The published order of the Malazan Book of the Fallen is the author's intended order and the best order in which to read this series for the first time.

Recommendation: The published order of the Novels of the Malazan Empire is the author's intended order and the best order in which to read this series for the first time.

Due to their haphazard publishing schedule and individually contained stories, these novellas' publishing order is vastly different from chronological order. Either way, Blood Follows serves as the first novella and is the best introduction to the novella series. Readers may find the story flows much more naturally if the novellas are read in chronological order rather than published order.

There are no major spoilers from any B&KB novella to any other. However, Crack'd Pot Trail is best read after The Lees of Laughter's End and The Healthy Dead due to the reappearance of some characters and concepts.

Recommendation: The published order is the best order in which to read this series for the first time. The series is written in a style very different from the main series and spoilers go both ways.

Path to Ascendancy - prequels, take place many decades prior to events in either main series - by Ian C. Esslemont[]

Recommendation: The published order is the best order in which to read this series for the first time. We currently do not have a definite recommendation where to slot this trilogy into the overall reading order of the books. Dancer's Lament could be used as an alternate entry point into the Malazan universe for those who find Gardens of the Moon too much of a challenge as it does not spoil major plot developments for the main series although it does contain some spoilers. The same however applies the other way round in about equal measure.

Witness Trilogy - sequel to the Malazan Book of the Fallen, takes place 10 years after The Crippled God - by Steven Erikson[]

Recommendation: The published order is the best order in which to read this series for the first time. This trilogy should be read after completing the ten book Malazan Book of the Fallen series.

To read both authors concurrently in order of publication[]

There are numerous ways that all the series of the Malazan World can be combined into a single read order. For first-time readers, care must be taken to avoid reading things too far out of chronological order such that events do not make sense, as well as avoiding any events being spoiled before reading through them happening.

There are two main discussion threads on the Malazan Empire forums for discussing possible read orders:

For readers who want a single, sensible read order without going into discussion threads, the below is a read order recommended by many knowledgeable forum members which:

1. Gardens of the Moon
2. Deadhouse Gates

3. Blood Follows
4. The Lees of Laughter's End
5. The Wurms of Blearmouth

6. Memories of Ice
7. House of Chains

14. Return of the Crimson Guard

Reading order recommendations by the authors[]

In November 2017, Erikson and Esslemont's North American publisher Tor posted an article entitled "The Malazan Authors' Suggested Reading Order for the Series Is Not What You Would Expect". The list is strictly chronological by storyline. Although said to be approved by the authors, neither is quoted in the article. Fans have been skeptical over the list, considering it places two unfinished (at the time) prequel trilogies at its start. One fan on reddit.com claimed to have contacted Erikson about the article. In the response posted by the fan, Erikson said the article likely spawned from a chronological listing he and Esslemont had put together for Tor several years earlier.[1]

In a December 2017 interview (scroll down for English translation), Erikson preferred an order based on publishing date.

"I have seen a number of projected orders. For myself, I would take it in the basic order of publication dates. Why? Well, thematically, the internal timeline is less important than the meta-reality of when we, as writers, wrote the books. Even in our flashback works, we cannot help but be aware of what we’ve written before, and how the two forces resonate with one another. It would, in my humble opinion, be a mistake to ignore that element."
―Steven Erikson[[src]]

A diagram showing the interaction between the varying books. Initially devised by D'rek from the Malazan Empire Forum, it has been updated by Ituralde in 2022 to incorporate newer books. You could use this to make up your own reading order. 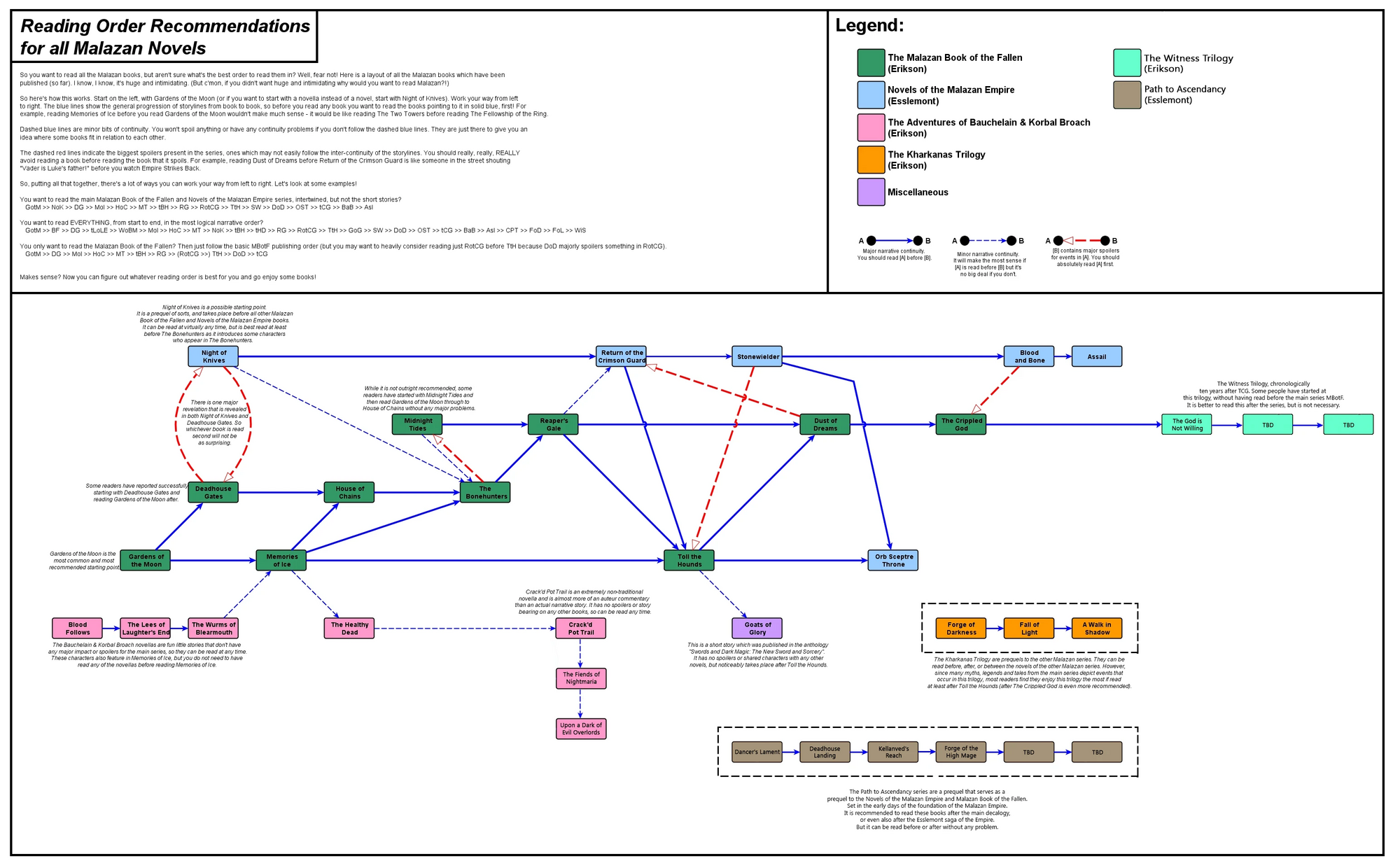