Toc the Younger was a Claw, a soldier in the Malazan 2nd Army assigned to the Messenger Corps outrider class,[4] and a poet. Although a Claw, he had no training as an assassin or mage.[5]

He had been badly injured during the Siege of Pale by falling debris from Moon's Spawn.[6] Half his face had been burned away, an eyepatch covered what used to be one eye and he held his head at an odd angle. He spoke with a rasping voice.[7] Toc thought of the missing eye as being the left one. Presumably, Paran had named it the right one as seen from his own view. The loss of his eye left him with a lasting urge to scratch around the empty eye socket.[8]

When riding, Toc was armed with a scimitar[8] sheathed at his hip and a short bow stowed in a saddle holster. He used the bow right handed.[9] He was a competent archer even after losing one eye.[10]

Toc was the son of famed Malazan commander Toc the Elder. Although he had heard the rumours that his father was dead, he tersely reminded others that his father had "disappeared" and was "not dead for sure."[11]

Toc was known to have used at least one alias, and in his capacity as a Claw, also went by the name of Render Kan.[12]

While a Claw, Toc developed a strong camaraderie with the soldiers of the 2nd Army, which sometimes resulted in divided loyalties when their interests conflicted with those of the Empire.[13][14] Also unlike most Claw, he was warm and open with allies who did not pose a threat.[15]

Toc the Younger was the only active Claw left in the 2nd, 5th and 6th Armies after the Siege of Pale.[16] Following the siege, he was assigned to escort Captain Ganoes Paran upon his approach to the city of Pale. He cheerfully offered Paran his assessment of the city's political situation and warned that the loyalty of High Fist Dujek Onearm's soldiers should not be tested.[17]

Sometime after a Hound of Shadow had attacked the camp, Toc went out to rendezvous with Adjunct Lorn. They were due to meet a day's ride outside Pale but Toc had ridden for three days before he came across evidence of her party having been ambushed by Ilgres Barghast on the Rhivi Plain north of Pale. He followed the trail of Lorn and her surviving Jakatakan Élite bodyguards. When he came upon them, his archery which killed two of the Barghast, and the timely arrival of the T'lan Imass Onos T'oolan saved Lorn. Toc had last seen a T'lan Imass eight years previously in Seven Cities, but only from a distance. Toc bound Lorn's injured arm whilst he updated her on the situation in Pale. He and Lorn then rode double on Toc's Wickan breed mare to Pale.[18]

Once in Pale, he attended a meeting of the city's new Imperial leaders. Before Dujek, Lorn, and High Mage Tayschrenn, he chose to remain loyal to the 2nd Army and not inform the gathering of Tattersail's obfuscations regarding the recent attack of one of the Hounds of Shadow.[19]

Later, he chose to put his trust in Captain Paran, disobeying orders so that he could help the captain save the lives of the Bridgeburners.[20] Enroute to Darujhistan, both were ambushed by Hairlock and Toc was thrown into the Warren of Chaos.[21]

The Imperial Historian Duiker recalled how he had been plucked out of the ranks of the Malaz 1st Army by Emperor Kellanved and given over to the tutoring of Toc the Elder, whom Kellanved called a "soldier with a brain." Toc taught Duiker to read and write alongside his own young son, Toc the Younger, a "runt of a boy who always seemed to be suffering from a cold." Toc the Younger was a quick learner and Duiker's education soon fell to him. Duiker said the boy later "rejected a life amidst scrolls and books."[22]

While Toc was unconscious in Chaos for two months, Togg came upon him and chose to inhabit his body in order to search for his mate, Fanderay. Shortly thereafter, Toc awoke at Morn, where he found Onos T'oolan, now calling himself Tool. They both joined Lady Envy and her entourage and travelled with them for a time.[23] During their travels, the pair became friends, and Tool gave Toc a new name Aral Fayle meaning 'touched by stone' for him having lost his eye to a chunk of Moon's Spawn.[24]

After reaching the town of Bastion, Toc left Lady Envy's entourage and joined the Pannion Seer's army as a means of getting back to Onearm's Host.

Later in Outlook, Toc was imprisoned by the Pannion Seer where he was endlessly tortured, broken and healed only for the punishment to begin anew at the hand of a mad K'Chain Che'Malle matron. Outlook fell to Lady Envy and her entourage, but the Seer was able to move both Toc and the matron to Coral.

When Toc's old companions finally converged on the city of Coral and attempted to rescue him, they inadvertently released Togg which had the unfortunate result of killing Toc.

To repay Toc for the use of his body, Togg helped Toc's soul inhabit the empty body of Anaster.

As Toc Anaster, he was made co-commander of the 700 Grey Swords of the Wolf's Reve and accompanied them to Lether following the prophecy of a final war at a place called the Battlefield of the Gods. In the Awl'dan, they were hired as mercenaries by the Awl in their fight against the invading Letherii Empire. But the Awl war leader, Hadralt, grew too fond of the coin he intended to use as payment and left the Grey Swords to die alone on the battlefield. When Toc pleaded for the fleeing war leader not to abandon his troops, Hadralt had him taken prisoner and kept him in chains in the filth of a drainage trench.[25][26][27] In the fighting, Toc had once again lost his eye, which was now only blistered scar tissue.[26]

When Redmask overthrew Hadralt for control of the Awl, he was furious to learn of Toc's captivity and immediately freed him. A surprised Toc told Redmask the Grey Swords had been awaiting the First Sword of the K'Chain Che'Malle, but they had not expected him to be Human.[26] As Toc Anaster's body recovered, Redmask kept him near as an advisor on military matters against the Letherii.[28] Factor Letur Anict of Drene soon launched the Awl Campaign, sending the Eastern Army commanded by Atri-Preda Bivatt and Overseer Brohl Handar against Redmask and his people. However Toc did not want to fight anymore so he took on his old role as an outrider, guarding the Awl army's flank as it marched.[29] Redmask eventually paired him with a brash youth named Torrent to train Awl children readying for the death night rituals that marked them as adults. Torrent was insulted by the assignment, seeing Toc as a broken man without courage and regularly taunted him.[30]

Toc's presence was also deeply resented by the last remaining Elder of the Renfayar clan, who claimed Toc dreamt of running with wolves and advised Redmask to kill the man and be done with him. When Toc was dead, then the shame of Hadralt and the Awl would be erased as if it had never been.[31] On the night before the Battle of Bast Fulmar, the Elder approached Toc and informed him he did not trust him, accusing him of planning to betray the Awl for their mistreatment of him. He refused to believe Toc's stories of being reborn in a new body and suckling at the teat of a K'Chain Che'Malle Matron, claiming evil spoke in lies.The Elder let Toc know that Torrent expected him to break and run, and when he did, Torrent would chase him down and slay him. Toc said Torrent was welcome to try, but it was the Awl who would need the prove their courage at Bast Fulmar.[32]

Toc Anaster did not actually fight alongside the Awl at Bast Fulmar, which was a stunning Awl victory.[33] At the Battle of Pradegar he tried to dissuade Masarch from leading a doomed cavalry charge against Letherii sorcerers. When the charge broke apart and panicked as he predicted, he raced his own horse into the fray to cover the retreat. A stone arrow he shot into the forehead of a Letherii mage caused a magical backlash that slew three linked mages in total,[34] eliminating all but two of Bivatt's five mages.[35]

By the time of the Awl's last stand at the Battle of Q'uson Tapi, Toc knew Redmask was competent, but no tactical genius.[36] While the two armies grappled in Q'uson Tapi's mud, Toc remained behind the lines with Torrent and a score of children. After Redmask was slain and his people essentially annihilated, a large group of Letherii Skirmishers descended on Toc and his charges to finish the massacre. The Grey Sword hastily handed over his satchel of poetry to Torrent and ordered him to lead the children to safety while he bought them time to escape. Torrent had not gone far before he noted the arrival of another unknown army approaching on the horizon. Thinking they were dead anyway, he turned to bear witness to Toc's final moments, and realised he had been wrong to doubt the man's courage. He was astonished when the Malazan managed to kill ten or more skirmishers before being cut down and his face mutilated.[37]

Onos T'oolan and the newly arrived White Face Barghast came to Q'uson Tapi to slay both the Awl and the Letherii. They had seen the aftermath of the massacre of the Grey Swords and Tool had assumed his friend had been killed. When he found Torrent weeping, he would have slain him and the Awl children but for the revelation that Toc had died to protect them. Tool was consumed with grief at his friend's death, once again too late to save his life. Further, Tool had never revealed his true identity to Toc once the T'lan Imass had been restored to mortality. The game had long been a source of amusement for him awaiting the time for a revelation of the truth. Hetan worried her husband might never recover.[38]

Hood claimed Toc as the Herald of High House Death and sent him to tell Picker to deliver a message to Karsa Orlong about killing a god. Toc then led a carriage of the Trygalle Trade Guild containing Gruntle and Mappo Runt through Dragnipur to the Wastelands.

In Dust of Dreams[]

Whiskeyjack granted a longstanding desire of Toc's and inducted him (posthumously) into the Bridgeburners where he joined them as guardians and arbiters of Hood's Gate.[39]

Toc was born aboard a ship, quite possibly the Ragstopper. His mother was Cartheron Crust's sister and his father was Toc the Elder.[40] He, along with his two older siblings (probably half-siblings), Ingen and Leese, were subsequently raised among the Seti.[41] He was considered somewhat of a runt.

Later, at school he helped a veteran soldier, Duiker, learn to read.[22]

He was the author of:

Under the name Toc Anaster he also authored:

Toc the Younger by Artsed

Toc the Younger by Corporal Nobbs

Toc the Younger by Ylva Ljungqvist

Tool and Toc by Dark.H 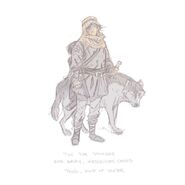 Toc the Younger and Togg by Matt Smith

Togg finds Toc unconscious in the warren of Chaos, by Toraneko