"See him. In the eternity before dawn. When among mortals courage is at its weakest, when fear sinks talons on the threshold and will not let go. When one awakens to such loneliness as to twist a moan from the chest. But then...you feel it, breath catching. You feel it. You are not alone...The Watch stands guard."
―Remarks about Yedan Derryg[src]

Yedan Derryg was The Watch,[1] the Prince and Watch of the Shake.[2] His sister, Yan Tovis, or "Twilight", was the Queen of the Shake.[3]

He had a prominent, muscular jaw with a matted black beard, and was always chewing on something. He wore a visored helmet and a chain hauberk with glistening blackened rings, and carried a long-handled single-bladed axe.[4]

Yedan "was not a loquacious man. He might well possess a hundred thousand words in his head...but that did not mean he laboured under the need to give them voice."[5]

Yedan Derryg was living in Boaral Keep as Master of Arms under the command of the Dresh Boaral and in the service of the Letherii and the Tiste Edur. His sister Yan Tovis found him there on her journey north, meeting him for the first time since her childhood. It was revealed that Derryg left his home when he was still a child due to certain disagreements with his father. Yedan called her “Queen” for the first time in front of his soldiers.[4]

Responding to a "call" from the coast, the pair discovered an entire fleet of hundreds of burning ships south of Rennis. Yan Tovis revealed that she was familiar with the newcomers, identifying them as the Malazans, an empire from a distant continent.[4] Later he traveled with his sister and his people heading north to Road's End. There Yedan asked his sister not to send his people to the war against the Letherii as they prepared to take a ferry to Third Maiden Fort.[6]

Their ferry had trouble reaching Third Maiden Fort, and was ultimately saved by two Thrones of War, who transported them to their final destination, the Silent Isle.[7] Once there, they were brought into the presence of Adjunct Tavore Paran by Galt. After stripping Shake Brullyg of his title, Yan Tovis took command of the island and negotiated with the Adjunct for the departure of the invaders.[8]

According to Deadsmell, his name was rooted in the language of his Shake and Tiste Andii ancestry. The name "Yedan" was a degeneration of the original word "Yedanas" in the Tiste Andii language, which meant "Watch", both act and title. The meaning of Derryg was not revealed.[8]

In the end they both saw from the pier the Adjunct's fleet set sail for the city of Letheras.[9]

Yedan slaughtered a hundred and more Shake witches and warlocks for plotting against his sister. Only two Shake witches, Pully and Skwish escaped the slaughter. Yedan was banished for his actions and the two surviving witches referred to him as 'Witchslayer'.

Though he was banished he did not stay away and ultimately led his troops to assist the Shake migration. Upon returning to Kharkanas, Yedan found an ancient Hust sword upon the strand, a weapon forged for killing dragons that laughed with every swing. He was a homosexual, remarking that he "never had any interest in women" and thus, win or lose the coming battle, he would be the last prince of the Shake.

Yedan remembered memories not his own.[10]

Yedan led the initial defence of the First Shore, killing over a thousand Tiste Liosan, the last Hounds of Light and several Soletaken dragons before being slain by Aparal Forge in Eleint form. Such was his skill with the blade that the Liosan on the other side of the gate whispered that a legion of Hust sword-wielding soldiers surely waited for them across the gate to Kharkanas.

Twilight & The Watch by Corporal Nobbs 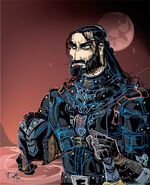 Retrieved from "https://malazan.fandom.com/wiki/Yedan_Derryg?oldid=99121"
Community content is available under CC-BY-SA unless otherwise noted.